Century Plaza Towers at Century Park stands as a hallmark of the Westside of Los Angeles’ city skyline.

Home to some of the most prestigious tenants in the country, including industry leaders in entertainment, law, finance, new technology and more, Century Plaza Towers at Century Park stands as a hallmark of the Westside of Los Angeles’ city skyline.

So when the owners of the 2.4 million square-foot buildings decided to upgrade its existing core public restrooms on each of the 44 floors, it created two opportunities. First, it allowed the restrooms to match the elegance and aesthetic expectations of the Class A property by adding Sloan sinks. Second, the upgrade also let architects specify fixtures that were more water-efficient in order to meet Century Plaza Towers’ commitment to green building sustainability. 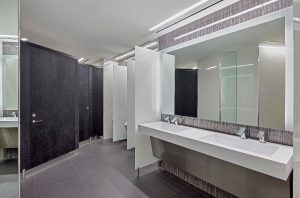 Flushometers, faucets and hybrid urinals from Sloan is an ideal solution to meet the green building sustainability goals at Century Plaza Towers.

In addition to the water-saving features of Sloan flushometers, three of its 7000 series designer hybrid urinals were specified for men’s rooms on each of the floors. The hybrid urinals feature Jetrinse Solution Technology that automatically cleans the housing and drain every 72 hours and eliminates odor and clogs. Sloan hybrid urinals helped contribute to the annual water savings of the property.

Hitting the Drought with an Uppercut

With Southern California mired in a drought at the time of the modernization project, architects specified UPPERCUT Flushometers from Sloan to reduce water volume in all of the restrooms in the building. The flushometer is known for its two water-efficient flush options, pushing the handle down for full flush of solid waste (1.6 gallons-per-flush) and pulling the handle up for liquid waste (1.1 gallons-per-flush). With its water-efficiency features, UPPERCUT Flushometers contributed to Century Plaza Towers’ Water Conservation Program. 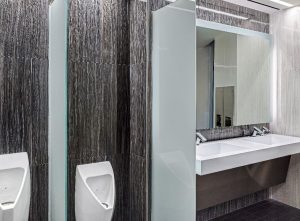 The hybrid urinals feature Jetrinse Solution Technology that automatically cleans the housing and drain every 72 hours.

When you think of U.S. cities offering upscale amenities, Los Angeles certainly comes to mind. Century Plaza Towers complements the modern design aesthetic of the city with the space-saving customizable sink line from Sloan incorporating both Sloan soap dispensers and faucet, and a basin that fits its space. With the addition of paper towel holders and trash bins, the entire design works together. The restroom features BASYS faucets, a product offering interchangeable components. In addition to modern features, the water-saving components of the BASYS faucet reduced water flow from 1.5 gallons-per-minute to 0.5. Additionally, Sloan teamed up with Stone and Steel, a company providing commercial office and hospitality solutions, to provide custom LED mirrors, adding an extra touch of elegance to the Century Plaza Towers restroom.