With the help of modern technology and genealogy websites, many Americans can trace their family trees back to the first ancestor who set foot on U.S. soil. But not many Americans actually can walk in those ancestors’ footsteps. As principal in charge of the renovation and restoration of the Joseph R. Biden Jr. Railroad Station in Wilmington, Del., local architect William Holloway, AIA, LEED AP, with Bernardon Haber Holloway Architects PC, had the rare opportunity to get a glimpse of the railroad history of which his great-grandfather played a significant role. 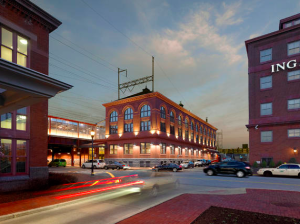 In 1906, Holloway’s great-grandfather, Jacob Mesch, emigrated from Riga, Latvia, to Wilmington. He was a cabinetmaker by trade, and his first U.S. job was woodworking inside the private railroad cars being built at Jackson and Sharp Co., a Wilmington rail and shipyard. Those cars eventually made their way to the new Wilmington train station (now Joseph R. Biden Jr. Railroad Station), which began operating in 1907. The cars actually would become the station’s main attraction because Frank Furness, one of the highest-paid architects of the time, had designed Wilmington station to celebrate America’s industrial strength and to take advantage of Wilmington’s newly elevated rail lines. Furness designed the station so the trains would run through the second floor of the building. The main waiting area was placed at track level to allow passengers the ability to marvel the trains while a concourse and ticketing area were tucked away under the tracks at street level.

As architect of record, Holloway’s firm had the opportunity to improve upon what Furness created and celebrate the thoughtful craftsmanship of Holloway’s great-grandfather’s era by integrating the best of modern technology into the station while refurbishing its historic splendor. “The station is an icon of Wilmington, and we were honored as local architects to have the ability to influence how the facility is going to be used for the next 30 years or more,” Holloway says. “I took a personal interest in it, certainly. It became a labor of love.” 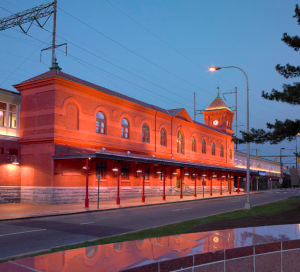 Despite always having an interest in the station, which today is owned by Washington, D.C.-based Amtrak, Holloway and his firm weren’t just handed the opportunity to oversee its first major renovation/restoration since the early 1980s. Bernardon Haber Holloway Architects, which for the past 15 years has had a major focus on adaptive reuse and historic restoration, was selected to take part in an intensive interview process that included Delaware’s Secretary of Transportation and Sen. Tom Carper (D-Del.) who serves on the U.S. Senate Environment and Public Works Subcommittee on Transportation and Infrastructure and is a wellknown supporter of rail transportation.

After Bernardon Haber Holloway Architects was selected as architect of record, it began putting together the entire team for the project. Integral to the team was Frens and Frens Restoration Architects, West Chester, Pa., a firm Bernardon Haber Holloway Architects relies on for its historic technical expertise. “They are instrumental in helping us figure out the details, like what kinds of plaster, masonry and terracotta to use to maintain historic integrity,” Holloway notes. 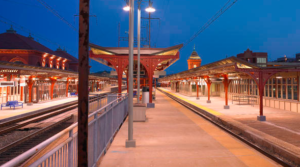 Project design took place in 2006, but then the documents were shelved for 18 months. “Amtrak’s funding is uncertain, and they just didn’t have the dollars when they thought they were going to have them,” Holloway recalls. “Then the stimulus money came out, and Amtrak realized the project very readily met the stimulus criteria. Remember the phrase ‘shovel ready’? At the time the stimulus money became available, Wilmington station was shovel ready.”

The station received $20 million from the American Recovery and Reinvestment Act; $12 million from Delaware’s Department of Transportation; and $5.7 million from Amtrak, $2 million of which was added to the budget to address issues outside the project’s original scope, such as state of-the-art dynamic signage and a public-address system to meet new requirements of the Americans with Disabilities Act. “Many times when you work with a major entity, like Amtrak, they’re just going to work with the budget and defer other issues,” Holloway notes. “They really did try to fix as many things as they could while the station was down.” As Holloway alludes, a major part of the budget was dedicated to construction of a temporary train station parallel to the existing building. The temporary station operated for three years during the renovation/restoration.