Wilmington Station was placed on the National Register of Historic Places in 1976, so the team was bound by the Secretary of the Interior’s Standards for Rehabilitation. “We did follow these guidelines very strictly for places where we had original fabric, which is the entire exterior envelope of the building, the historic waiting rooms and various stairways,” Holloway says. “We regularly went through our state historic preservation office to confirm we were following the requirements very closely.” 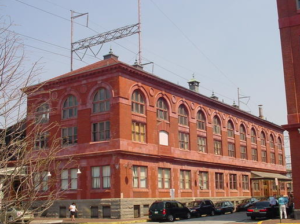 A lot of attention was spent restoring the building’s façade. It is composed of red bricks, red terracotta and red mortar. Unfortunately, in the 1970s and ’80s it was popular to clean masonry with a diluted muriatic acid, which had eaten away the clay glazing on the exterior of the terracotta. “The terracotta became porous and salts would leach through it, creating white chalk-like deposits,” Holloway says. “Working with Frens and Frens, we identified an oil-based masonry stain that could treat all the exterior terracotta without replacing it. The stain should protect the terracotta for 20 or 30 more years. It also was picked carefully so the stain’s color replicated the color, depth and consistency of the red façade.”

One of the major restoration challenges related to the building’s windows. “Original windows are often the most revered part of a historic building because they don’t make windows the way they used to—with the sight lines, the thicknesses of frames and the muntins,” Holloway notes.

Since the building’s last major renovation in the early 1980s, the original wood windows had withstood many years of weather, not to mention the techniques that had been used to restore them in the ’80s are today considered obsolete. Holloway says the windows were in terrible shape, and Amtrak was not in a position to maintain wood windows every year or two to ensure their integrity. After many discussions, Holloway’s team was able to work out a compromise with the state historic preservation office in which windows exposed to weather would be replaced with custom-made historic-quality aluminum windows that feature 1-inch double-pane insulated glass with a low-E coating. 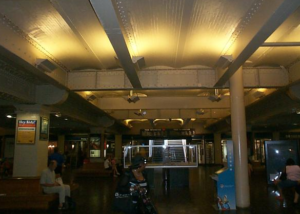 The station’s concourse, which actually is below the tracks, was dark and dingy before renovation. Photo: Don Pearse Photographers, courtesy of Bernardon
Haber Holloway Architects PC

Although this was not the preferred method of the local preservation office, Holloway says Amtrak was happy with the decision. “Amtrak just did not have the resources to properly maintain the windows,” he says. “If we restored them, they’d fall into disrepair again before another major renovation is scheduled at the station.”

The wood windows protected by a platform or canopy were retained and restored. They also were retrofitted with interior storm windows to create a dead air space that would increase their thermal efficiency. “Because we wanted to maintain the look from the outside, the storm windows were placed on the inside of the building,” Holloway notes.

For the interior restoration, Holloway’s team was able to rely somewhat on Amtrak’s archives, which contain original drawings for many of its stations, including Wilmington. However, Holloway says architectural drawings from 1905-06 leave a lot of leeway to craftsmen of the day, giving men like his great-grandfather the opportunity to showcase their skill. “Frank Furness’ company didn’t document a lot of the details we see today,” Holloway adds. “They indicated plaster coffers this deep by this wide on this kind of centers, but the look was basically dictated by things that were commonly done by plaster workers.”