The National Geographic Society campus in Washington, D.C., is home to all things anthropological. Inside of its stately walls are the society’s popular museum, magazine and book publishing offices, archives, television production studios and administrative offices. When Richard Neil, chief engineer for the expansive three buildings, conducted an evaluation of energy usage in 2001, it was determined that his team needed to immediately reduce the buildings’ solar loads. 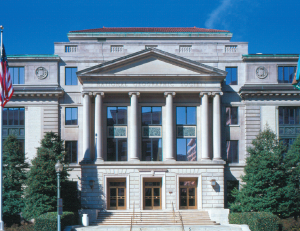 Frank and Patrick Clugston of Eastern Metallizing Inc., initially analyzed the building for energy-related problems. They suggested the installation of 12,500 square feet of Solar Gard Solar Bronze 20 and Stainless Steel 35 on the upper floors of the building.

Two years after successfully addressing the solar-load problem, the U.S. General Services Administration recommended all buildings within the D.C. area provide a measure of blast mitigation for their windows. National Geographic Society engineers turned to a familiar vendor to assist with their problem. This time, the Clugstons recommended Solar Gard Armorcoat 4 Mil Clear on the interior lobby windows and in the cafeteria. The durable, resilient Solar Gard Armorcoat film ensures there is a strong safety measure in place in the event that a nearby, or even direct, terrorist attack results in shattered windows.

“Both installations did exactly what we needed them to,” Neil says. “Now we have increased safety and receive exceptional energy savings. Best of all, we achieved it through a solution that was both attractive and effective; it didn’t darken the rooms and doesn’t take anything from the architect’s original intent. Solar Gard and Armorcoat were the ideal retrofit products for our campus.”

Leviton Partners with Make It Right to Support Energy-efficient Communities