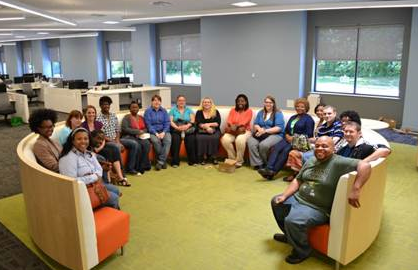 Prometric employees gather in a collaborative open space. Workstations are visible in the background.

Like many forward-thinking companies, Prometric values the way open work space encourages collaboration and innovation. When Prometric, which administers some 10 million professional certification exams each year, developed a new global operations hub outside of Baltimore, converting an existing warehouse was an ideal way to create collaborative space. 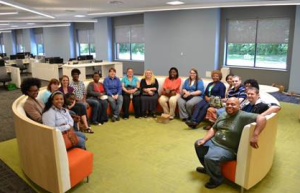 Prometric employees gather in a collaborative open space. Workstations are visible in the background.

The company purchased a warehouse in White Marsh, Md., with plans for a $12 million, 60,000-square-foot facility. To take full advantage of the open floor plan, the design team needed to provide a dense network of power and data/communications services to the workstations.

“The challenge was to reach free-standing desks in the open spaces and to provide for future flexibility,” says Bob Brinkman, business development manager at Douglas Electric and Lighting (DEL Electric) in Hunt Valley, Md.

The original plan was to install raised floors, but there were cost considerations and concerns about whether the tight construction timeline would accommodate raised floor installation. Seeking an alternative, Brinkman and other members of the team turned to Legrand for its wire and cable management expertise.

Working with Legrand, the team designed a wire and cable management system that would be installed within the floor. Instead of locating power and data/communications in a raised floor, they opted to cut into the existing concrete slab and install high-capacity Walkercell cellular raceway. This Wiremold system was chosen for its flexibility and ability to manage a high volume of power, communications and audio/video cabling.

The Walkercell system provides service through a grid of cellular infloor ducts that support integral activation points called “presets”, which house power receptacles and communication connections. Legrand helped design the grid system so that a preset was located at each workstation to provide maximum service to open areas. As space usage changes in the future, new activations and/or deactivating existing ones can be made quickly and efficiently. 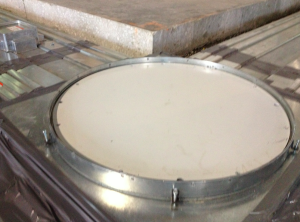 A round junction box in the cut-out trench connects two segments of the Walkercell system. A “preset”, visible to the left, channels wires and cables to a workstation.

According to Brinkman, “The installation involved making saw cuts in the existing floor, removing old concrete and stone, pouring new concrete in the trenches to the correct height, and installing the Walkercell components.”

Wires and cables were fed into the Walkercell system from overhead through Wiremold Wallduct raceway located in the wall. At the workstations, recessed activations were completed using FloorPort activation covers that feature TopGuard protection to prevent water from carpet cleaning from entering the power and communication device compartments.

“The installation went very well,” Brinkman says. “It went in quickly so we could move forward with the project.”