Wolf Ridge Environmental Learning Center, Finland, Minn., is a nationally accredited K-12 school and residential educational center for outdoor learning adventures. It offers activities and programs that focus on natural and cultural history, outdoor skills, team building and personal growth. The campus, which spans more than 2,000 acres of forests, inland lakes and streams, is located in one of the most northern areas of the nation—where winter temperatures can fall well below 0 for months at a time and snowfall accumulations can be more than 100 inches for the season. 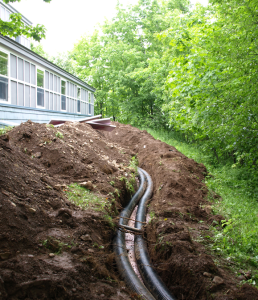 Campus buildings, with the exception of the Science Center, were heated via wood-fired, hydronic (hot water) boilers, located in a remote district heating plant between the East dormitory and the dining hall (approximately 500 feet from each building).

The first buildings constructed on the site in 1987 included two classroom buildings, an administration building, a dining hall and a dormitory, all totaling 61,000 square feet. All of the buildings, with the exception of the Science Center building, were heated via wood-fired, hydronic (hot water) boilers, located in a remote district heating plant between the East dormitory and the dining hall (approximately 500 feet from each building).

An underground fiberglass piping network distributed hot water to heat the buildings through air-handling coils. The fiberglass pipes were insulated with 1/2-inch urethane foam and covered with polyethylene black plastic wrap. The Science Center building was heated via an in-slab hydronic radiant floor heating system, which received local electric off-peak energy for the heating supply source. The Science Center could not be part of the underground distribution loop due to the fact that the ground was complete bedrock and would have required additional soil to bury the piping.

The entire district heating system seemed to work well upon initial installation. However, during the first winter, the heat loss to the ground was substantial enough, according to Pete Smerud, executive director of Wolf Ridge, “you could see a ‘melted path’ in the snow where the distribution pipes were buried. It was obvious we were wasting significant energy.”

In 1996, Wolf Ridge added a second dormitory (the East dorm), but this time instead of using fiberglass for the underground distribution loop, they decided to try another product they hoped would offer better insulation properties compared with the rigid fiberglass system.
“We decided to try a new system that had previously been used in Sweden in a similar climate,” says Smerud. “We liked that the product came in long coils with a continuous vapor barrier and had superior insulation.” 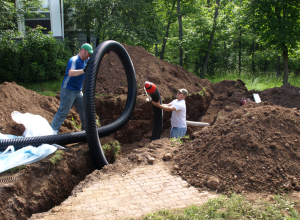 Because heat loss was apparent by melted snow in winter, school administrators opted to replace the piping with Ecoflex crosslinked polyethylene (PEX) carrier pipe surrounded by PEX-foam insulation and covered by a corrugated high-density polyethylene jacket.

The product, called Ecoflex, featured crosslinked polyethylene (PEX) carrier pipe in the core that was surrounded by PEX-foam insulation and covered by a corrugated high-density polyethylene (HDPE) jacket. The “unbonded slip system” style of the Ecoflex product allowed increased flexibility because the different layers could “move” independently from one another. The system also allowed easier accessibility to the service pipe, because the PEX-foam insulation was not adhered, or “bonded,” to it. The project used 1,223 feet of 2 1/2-inch PEX service pipe in the Ecoflex system to supply district energy for heating and domestic hot water to the 23,000-square-foot dormitory.

A New System for an Old Problem

Bernie Eikmeier of McKinstry Mechanical was brought in to perform an energy audit of the system. For three weeks in the winter of 2008, Eikmeier tested the heat loss of the fiberglass and the Ecoflex flexible pre-insulated systems to gather data. 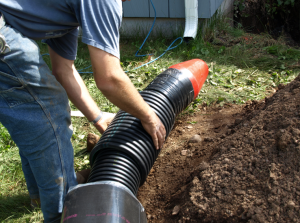 “Because the Ecoflex loop was not creating the same ‘path’ in the snow, the data from McKinstry essentially confirmed what we already thought—the flexible, pre-insulated pipe system would be the most efficient,” says Smerud. “Plus, because we’re a non-profit and funded from student-user fees, there was only one week out of the year we could be closed to do the installation. We needed a solution that could fit our tight construction schedule.”

The summer of 2009 marked the first phase of the installation re-piping to the administration building and dining hall. Gulbranson Excavating dug the trenches for the new pipe, while Shannon’s Plumbing, along with members of Wolf Ridge staff and engineers from Uponor, installed the new flexible pre-insulated pipe system. The re-pipe used 340 feet of 2-inch Ecoflex Thermal Twin (supply and return pipe in a single jacket) and 610 feet of 3-inch Ecoflex Thermal Single (a single pipe in the jacket).

“The pre-insulated pipes came in long coil lengths up to 600 feet, which meant we didn’t need to stop often to make connections,” says John Liebelt, product engineer at Uponor. “We used a large uncoiler for two of the three coils, which made it really efficient to lay the pipe in the trench. For the third coil, we manually uncoiled it into the trench to minimize disruption to the terrain and surrounding vegetation.” 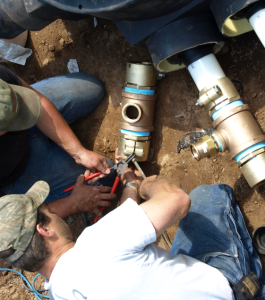 The pre-insulated pipes came in long coil lengths up to 600 feet, which meant the team didn’t need to stop often to make connections.

To achieve acceptable heat loss rates, the application required different levels of foam insulation, depending on soil depth. The frost line for the area was considered to be around six feet deep, so pipe installed in areas with zero to three feet of depth received one R-10 foam board below the pipe and two R-10 boards above; pipe in three to six feet of soil depth received one R-10 foam board above. Piping six feet underground and below was straight Ecoflex with no additional insulation.

McKinstry made a recommendation to mound the backfilled material over the pipe to distribute surface-water runoff. “This was especially important, as springtime water percolating through the soil created some of our most challenging conditions with the fiberglass pipe,” says Smerud. “The saturated soils from the spring thaw created so much heat loss to ground, we could barely heat the buildings.”

The system also received four new, 3,200-gallon cordwood boilers, each with a simple aquastat controller to circulate the energy through the new underground loops. The boilers were configured to back up one another in the event of a failure to ensure freeze protection of the system. 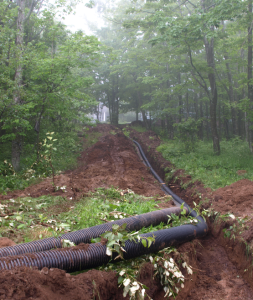 When it came time to install the second phase of the re-pipe for the West dorm and education building in the summer of 2010, the consistency of the pre-insulated pipe system allowed a fast, efficient install that met the same one-week construction schedule. The West dorm re-pipe used 180 feet of 2-inch Ecoflex Thermal Twin and 1,170 feet of 4-inch Ecoflex Thermal Single. “The whole installation went very smoothly and we were able to finish the project within the tight, one-week timeframe,” says Smerud. “Because we are a 24/7 operation at Wolf Ridge (with the exception of the one-week summer shutdown), the speed of the install was crucial in our success of the project.”

During the winter of 2010-11, Wolf Ridge saved approximately $7,000 in fuel-supply costs—just on the wood alone. The consumption of wood dropped 21.5 percent, from a yearly average of 200 cords to 157 cords—and that was during a very extreme winter. Reducing their consumption by 43 cords per year offered Wolf Ridge an annual savings of approximately 190 birch trees (140,000 pounds) and 860 MBTUs.

Aaron Stotko is a product specialist for Uponor Radiant Heating and Cooling. His background is in mechanical design, value engineering and product offering solutions for hydronic radiant heating and cooling applications. He is an expert in Ecoflex pre-insulated piping for water distribution and has presented several webinars on the topic, including Ecoflex for Commercial, Ecoflex for Residential and Efficiencies with Ecoflex. He is a committee member of ASHRAE TC-6.5 and SPC-152 and has a Bachelor of Science in Mechanical Engineering from the University of Minnesota at Duluth.

Be the first to comment on "Educational Campus Cuts Energy Costs More Than 21 percent after Upgrading to Flexible, Pre-insulated Pipe"