Sometimes the challenge in adaptive reuse is to transform not only the function or systems of an existing building but also its meaning. In contrast, for Kelly Cullen Community, an adaptive reuse of the historic Central YMCA in San Francisco, the challenge was to preserve the Y’s holistic dedication to body, mind and spirit in the context of a truly innovative integration of new homes for homeless people, supportive services for residents and supportive services for the whole Tenderloin neighborhood. 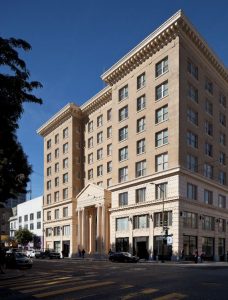 Sometimes the challenge in adaptive reuse is to transform not only the function or systems of an existing building but also its meaning.

The building, a National Register Criterion C, also embodies meaning in its preservation of an exceptional historic resource. The majestic 9-story classical building was designed by the prominent McDougall Brothers Architects. Their busy practice extended across California and included churches, three Carnegie libraries and other significant civic buildings.

The Y design and construction was completed in 1908 immediately following the 1906 earthquake and fire. The size and varied program of the central branch building reflected the Young Mens’ Christian Association’s ambitions. Despite the challenges of the period following the disaster and World War I, the San Francisco YMCA—as the association reported in the Y.M.C.A. Year Book (April 30, 1925)—was No. 1 among the 15 largest associations in North America in order of its achievements.

The building occupies a key corner in the Uptown Tenderloin National Register District. The Y faced a time limit to execute more than $15 million of seismic improvements for the building’s assembly spaces and historic standards of design and construction. Their decision to move the Y programs to a new location after 98 years of operation put the building at risk. In 2007, the Tenderloin Neighborhood Development Corp. (TNDC) acquired the building (now known as Kelly Cullen Community). Through a truly complex five-year long process, TNDC managed a $95 million rehabilitation process that depended on major funding from a variety of public and private sources, each with their own criteria.

Foothold into the Future

Kelly Cullen Community is named in honor of TNDC’s former Executive Director Brother Kelly Cullen, who passed away in November 2010. A dynamic force, Brother Kelly was a Franciscan friar; early resident of TNDC’s Aarti Hotel, a single room occupancy residential hotel; and a tireless advocate for the Tenderloin neighborhood and its lowest-income residents. Kelly Cullen Community exemplifies his spirit, by bringing beauty and showing respect for San Francisco’s poorest residents. In Brother Kelly’s words, “With safe, affordable housing and the power of community, TNDC offers a foothold into the future.”

Brother Kelly believed in serving the poorest of the poor. But, in its mission to house the homeless, TNDC faced real challenges in meeting the needs of people who might have lived on the streets for many years. From the beginning, the Y project was meant to locate housing and services together. This was a goal shared by the San Francisco Department of Public Health (DPH). DPH recognizes homelessness as more of a health risk factor than HIV, yet the complexity of the health problems suffered by homeless people makes it even more challenging to house them. For Kelly Cullen Community, DPH funded TNDC to house people with chronic health issues and also stepped in with a clinic to be located on the ground floor of the building. The clinic welcomes residents, as well as patients from the neighborhood and community at large. 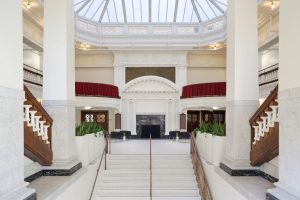 On the interior, the grand second floor lobby was reconnected with the main entry.

In a new building it might have been difficult to justify including a gym, auditorium and skylit atrium lobby. Indeed, as part of the Kelly Cullen Community renovation, a small gym, handball courts, offices and the swimming pool were converted or replaced by housing. But for TNDC and DPH, the remaining assembly facilities offered a great opportunity to reach out to residents and the Tenderloin neighborhood with a diverse variety of organizational, wellness and social activities.

The project received Historic Preservation Tax Credit funding, requiring updates to comply with the Secretary of the Interior’s Standards for the Treatment of Historic Properties. A series of alterations over the decades had impaired the integrity of a significant portion of the interior, most notably removal of the original grand stair from the main entry to the main lobby on the second floor. This move allowed the Y to control a single point of entry on the ground floor but created a maze of unintended circulation difficulties. Ironically, the need to create private and safe housing and public circulation for the new uses helped support the replacement of this key element.

For Executive Architect Gelfand Partners Architects and Historic Architect Frederic Knapp Architect, both of San Francisco, the construction of a new grand stair in the area of an original grand stair addressed three needs: