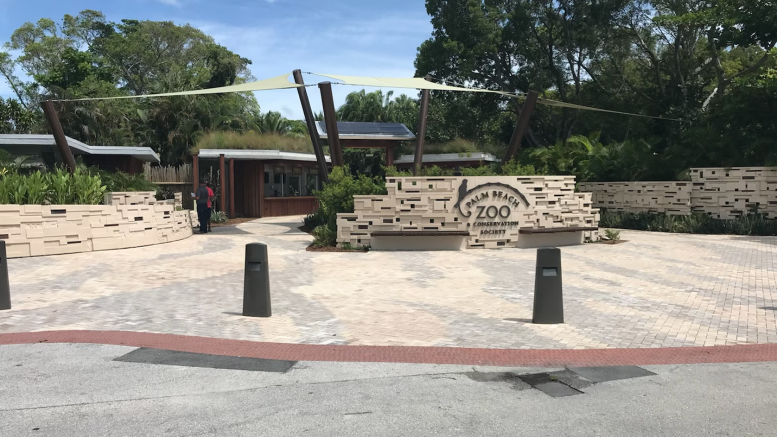 As part of ongoing improvements to the Palm Beach Zoo and Conservation Society in recent years, designers at Michael Singer Studio were tasked with reimagining the entry plaza in a way that would embody the organization’s values and conservation mission, as well as demonstrate to the visiting public how to build sustainably in South Florida.

The firm created a design that incorporated recycled materials and rainwater management tools with art and natural elements for a modern, welcoming feel. One of the more striking features of the new entryway is underfoot—an approximately 7,850-square-foot tiger stripe pattern of pavers. To create the pattern and control water runoff at the same time, Michael Singer Studio chose Belgard’s Eco-Holland permeable pavers in Napoli and Aragon colors.

Michael Singer Studio created sculpted walls, layers of vegetation and a flowing water garden that soften the edges of the entry plaza to retain the intimate experience that is at the core of the Palm Beach Zoo’s identity. Over time, the sculpted walls will be partially covered in a blanket of climbing Ficus. The sculpted concrete in the walls and water garden is locally cast with 100 percent recycled concrete aggregate. A new Florida Power and Light 100kW solar array shade structure covers a significant portion of the parking lot, and the plaza bollards are made from 100 percent recycled cast aluminum.

“In Florida, there is a significant focus on water management and codes require new construction take efforts to manage runoff,” says Jason Bregman, partner at Michael Singer Studio – South. “We took several steps, then, to incorporate features into the design that would manage water efficiently and effectively.”

Among these, the studio incorporated green roofs on top of the ticket booths to help keep the structures and surrounding area cooler, assist with energy efficiency and stormwater retention/filtration, and demonstrate a key strategy for urban wildlife habitat regeneration. “People are hesitant to do green roofs in Florida because of the hurricanes, but if they are engineered correctly, they can have a positive environmental impact for years to come,” says Bregman. Additionally, rainwater is collected in cisterns and used for irrigation.

The Eco-Holland permeable pavers used in the entryway let stormwater filter into the ground beneath, allowing the walkway and multi-use patio area to serve as green space through which water can move. “As an added eco-benefit, the pavers were regionally manufactured and there was recycled content used as the aggregate beneath them,” says Bregman.

Originally, he notes, contractors wanted to use poured concrete and then stain it with the tiger pattern. “They believed it would be too costly to do the pattern using pavers, but we argued for the pavers because they would have a much better aesthetic, can more readily be repaired and had the environmental benefits we wanted,” he says.

Bregman then reached out to Precise Paving Inc., which agreed they could do the pattern using permeable pavers—without a visible edging—and would do so without cutting pavers.

“It was more challenging to lay the pavers in this type of pattern, but keeping the 4×8 pavers intact without cutting them to fit saved three or four days of installation and was more economical,” says Rob Goossens Jr., vice president of Precise Paving Inc., “It also made it easier to meet OSHA’s Respirable Crystalline Silica Standard for Construction.”

The standard requires employers to limit worker exposures to respirable crystalline silica (a mineral found in concrete and made airborne when it is cut) and to take other steps to protect workers. This standard can be met through a variety of measures such as using water saws to cut concrete, but Goossens notes simply not having to cut the pavers was the easiest and most cost-effective way to achieve this.

An added benefit of using the full, Eco-Holland 4×8 pavers was the fact that they were “true and tested,” says Goossens. He worked with Bregman to come up with dimensions that would work using the full pavers. There was then plenty of time to plan the install before construction began so Goossens could prepare his team for the task at hand.

A member of the crew was dedicated to looking at the pattern on the plan and matching where the colors would be on the ground. He spray-painted marks directly onto the aggregate to indicate to the installers when the color would change, a project that took him two to three hours each day. Because it’s a dynamic pattern with jagged edges, they measured the main points to mimic the plan. Goossens notes: “The pattern didn’t slow us down in labor but took more planning time as we marked ahead of the guys doing the installation. We managed to complete all the base preparation and hand lay the pavers in about three weeks’ time and it was really rewarding to see how well the completed project matched the planned design.”

PermEdge was placed alongside and under the pavers, using their weight to hold it in place. This spikeless edge restraint with an attached geogrid eliminated the need for big header curbs.

“This is a great example for other projects looking to incorporate dynamic designs because it shows it is possible to do unique patterns without the added labor and cost of cutting the pavers,” says Goossens.

“This project represents an investment in our Zoo as the second-most visited cultural attraction in Palm Beach County,” says Palm Beach Zoo CEO and President Margo McKnight. “It provides a warm and welcoming atmosphere to our visitors and members.”

“I’m really pleased with the way the design turned out—and that it could be accomplished with a pervious system that was within budget,” says Bregman.

Retaining Walls Can Be 15 Feet Reinforced and 10 Feet Unreinforced