Preservation at the Forefront

Although not currently on the National Register of Historic Places, the vintage hotel is recognized as a historically significant building and has maintained its historic marquees, signage, awnings, window size and location, and roof details. 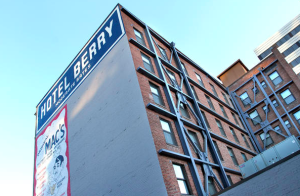 Bracing strengthens the structure so it complies with seismic code.

Preserving the structure conserved resources, reduced stress on infrastructure and kept refuse out of landfills. All of that contributed to the City Council’s decision to reuse the building in accordance with the city’s 2006 housing ordinance that includes a “No Net Loss” policy, requiring that 712 single-room-occupancy units downtown be retained. The Studios at Hotel Berry accounts for 105 of them.

The property’s downtown location makes it a viable transit-oriented development; the building is in walking distance of public transportation, such as light rail, bus lines and an Amtrak rail station.

The $24.7 million renovation was financed through public and private sources. Although initially difficult to finance because of the nationwide financial crisis, SHRA acquired the property for $1. It relocated remaining residents as a strategy to stabilize and hold the property for a suitable development opportunity, Archuleta explains. 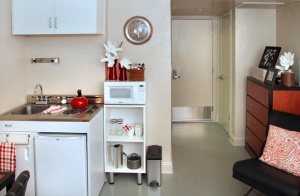 Each of the 104 studio units includes a kitchenette.

Hotel Berry’s retrofit demonstrates that it is worth taking the time to evaluate and rehabilitate historic buildings. Archuleta notes: “The local community reaction has been very positive. The Studios at Hotel Berry has been recognized with numerous awards from local, regional and national industry organizations.”

Dunn says, “This successful renovation goes to show that everyone deserves a beautiful place to live.”