Presidio Knolls School was founded in 2008 as a preschool, combining a Reggio Emilia-inspired educational approach (based around certain fundamental values about how children learn) with Mandarin language immersion. The popular school quickly outgrew its original site in San Francisco’s Marina district and moved to its current location south of Market Street. The site includes multiple buildings, which will allow the school to continue to expand and reach its goal of serving preschool through 8th grade. 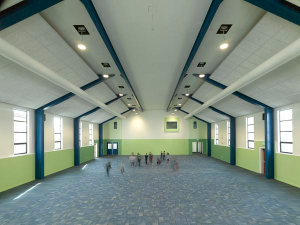 The current project’s goal was to bring the 1913 building up to current building-code standards, including seismic safety and accessibility; to provide a flexible multipurpose space for the growing school; and to maintain the historic exterior of the building.

The site previously belonged to the Catholic Archdiocese, originally serving St. Joseph’s parish. When the church left the site, the buildings were reused by a variety of other organizations, including a preschool, but were poorly maintained. Presidio Knolls School initially undertook small renovation projects to improve existing classrooms. However, as enrollment increased, additional space was needed to meet programmatic needs. To accommodate this growth, school leaders examined the buildings on campus and chose to renovate an existing contributing historic building, renamed Pioneer Hall by the school.

Pioneer Hall was originally constructed in 1913 as a temporary home and parish hall for St. Joseph’s Church, whose original building had been destroyed in San Francisco’s 1906 earthquake. The gabled, wood-framed building had one large assembly space interrupted by two rows of intermediate wood posts supporting wood roof trusses. At the rear of the building, there were three floors of classrooms and restrooms, originally thought to be a later addition to the building that could potentially be demolished.

The current project’s goal was to bring the 1913 building up to current building-code standards, including seismic safety and accessibility; to provide a flexible multipurpose space for the growing school; and to maintain the historic exterior of the building.

The structural strategy utilized a mat slab foundation and steel moment frames, which would allow the assembly space to have a clear span from exterior wall to exterior wall, with horizontal steel beams providing a means of supporting a new mezzanine level where there were previously three levels. The elevation of the slab was set to provide level-in disabled access at one entrance with additional accessible entrances to be provided during a later phase of renovation. Setting the slab elevation as high as possible while maintaining disabled access also minimized required excavation. The resulting finish-floor elevation, however, is 3 1/2-feet lower than the original building’s raised wood-finish floor.

The first step in the complex construction process was to stabilize the existing building. Temporary concrete footings were poured to support the steel moment frames that would be used to shore the exterior walls and roof and were later incorporated into the finished project. Careful coordination was required between the general contractor, shoring engineer and structural engineer to establish splice locations for the steel frames so they could be craned through holes in the building’s roof and field bolted and welded.

Determining where to place the moment frames relative to the building also proved challenging. The existing building was a more than 100-year-old, wood-framed structure that had not been well maintained and had significant water damage. Because it was erected as a temporary home for an earthquake-displaced congregation, it is also likely that it was built with some haste. The building lacked dimensional regularity; though it appeared to be rectangular in plan, it was more of a parallelogram. Field measurements determined the maximum and minimum dimensions so that an intermediate datum could be established and used as a work point for setting the new rigid, orthogonal structural grid. 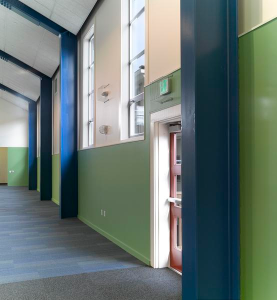 As demolition progressed, several discoveries were made. The entirety of the exterior of the existing building is cement plaster, but it became clear that everything except for the front façade and towers was originally horizontal wood siding.

After the moment frames were placed, additional steel cables and wood shoring stabilized the roof trusses and exterior walls. The bottom 5 feet of the exterior walls were then cut away and the building was left draped over the steel frame. The existing foundations were removed to make way for the new mat slab and concrete stem walls that would become the new exterior wall below the existing wood framing.

The original main façade and domed towers on Tenth Street, which were required to be maintained, were left untouched. However, the foundations of the towers were at different elevations than the new mat slab and required stabilization. Different strategies were examined and ultimately permeation grouting was utilized because of the site’s sandy soil.

As demolition progressed, several discoveries were made. The entirety of the exterior of the existing building is cement plaster, but it became clear that everything except for the front façade and towers was originally horizontal wood siding. Based on the placement of the diagonal wood sheathing, it also became clear that the 3-story classrooms at the rear were original to the building and, therefore, could not be demolished. In this area, some of the roof framing and trusses had been modified to create occupied spaces. As a result, the structural integrity was compromised and the roof had a significant amount of sag that required reframing.

Laura Rambin, AIA, LEED AP BD+C, is a principal at Studio Bondy Architecture, Oakland, Calif., where she focuses on the design of educational spaces.