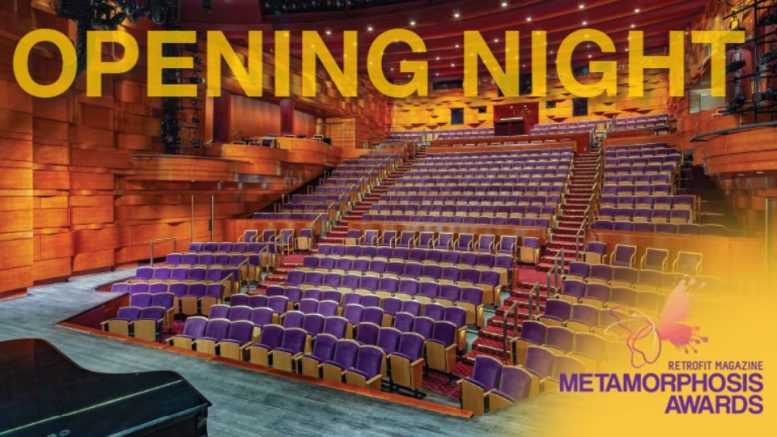 Since the John F. Kennedy Center for the Performing Arts opened in Washington, D.C., in 1971, it has been in a state of evolution. Designed by famed Architect Edward Durell Stone and constructed between 1964 and 1971, the project was the culmination of Eleanor Roosevelt’s idea in the early 1930s to create a national cultural center that would prohibit discrimination of cast or performance and be a venue for everyone in the U.S. Originally named the National Cultural Center, the venue became the John F. Kennedy Center for the Performing Arts after JFK’s assassination in late 1963. It was renamed to be a living memorial to the president because the center’s inclusive mission embodied many of the principles JFK stood for during his presidency.

Beginning in 1994, the entire facility has been through several phases of renovation, including updates to the building’s life-safety systems and accessibility requirements. Leora Mirvish, AIA, LEED AP, a principal with Quinn Evans in Washington, is no stranger to the evolution of the Kennedy Center. She has overseen or been part of four of the nine major renovations that have occurred at the center since the 1990s: the Concert Hall, 1997; Opera House, 2003; and Eisenhower Theater, 2008. In 2010, her attention was turned to the fourth-largest venue in the Kennedy Center, the Terrace Theater.

The outcome of Mirvish and her team’s work is not only inspiring performers and guests of the John F. Kennedy Center for the Performing Arts, but the Terrace Theater also earned them an inaugural Metamorphosis Award in the Interior category.

The 487-seat, 30,000-square-foot Terrace Theater is smaller than other Kennedy Center theaters. However, it is one of the busier venues and is known for its ability to accommodate experimental performances, from spoken word to live music. Opened in 1978, the Terrace Theater was a bicentennial gift to the center from Japan. By the early 2000s, the theater had become functionally obsolete with worn finishes, aging systems and inadequate accessibility in the steeply raked theater.

The analysis of the existing space and redesign process began in 2010 and involved Building Information Modeling and physical models to reimagine the space and solve accessibility concerns. Because it was constructed in the middle 1970s, accessibility for disabled patrons was not on the designers’ radars. Observations by Kennedy Center leadership revealed patrons who were wheelchair-bound or had difficulty navigating the steep rake of the theater could not enjoy performances, which did not live up to the center’s mission of inclusiveness.

The renovated theater provides a new seating configuration that helps with sightlines and accessibility by expanding the rear of the theater, adding new cross-aisles and side boxes, as well as creating a more gently sloped seating area at the front. More than twice the number of ADA-required accessible seats are now distributed throughout the theater.

The accessibility improvements also offered the opportunity to enhance the hall’s acoustical performance. After extensive analysis of the theater, the design team decided to alter the volume of the space by raising the ceiling level, which also improved the lighting positions. A new circulation staircase and elevator were incorporated into areas that were formerly back-of-house spaces, creating a new lower lobby. The main lobby was pushed back approximately 10 feet, which also altered the existing volume of space.

Although generally regarded as having good acoustical properties for certain performances, the Terrace Theater’s acoustics were not always optimal. The design team was required to maintain a high level of acoustical performance but altering fundamental aspects of the space introduced challenges.

“When Edward Durell Stone originally designed the facility, the space where the Terrace Theater is located was intended to be a theater in the round with a rotating stage,” Mirvish says. “Some of the original infrastructure was still in place—all challenges the design team had to contend with to achieve the acoustical performance we desired.”

To overcome many of the acoustical challenges, more than 500 custom curved wood panels—that symbolize soaring sound waves—were placed in the space with guidance from the design team and an acoustical consultant. The panels help tune the acoustical properties of the space.

“All the panels were created from around a dozen different patterns,” Mirvish explains. “By limiting the number of molds, we were able to decrease the cost and still provide the unique acoustical properties we needed. The panels help us modulate reflection versus diffusion of the sound. In the rear of the theater, we wanted more sound diffusion, so the curves of the panels have greater amplitude; in the front, we wanted more direct reflection of the sound energy, so the panels become flatter at the forestage area. The wood panels give us the sound qualities we were looking for and became a part of the aesthetic of the design.”

Mirvish credits the success of this strategy to early collaboration with the Kennedy Center, construction manager, acoustical consultant, millworking contractor, as well as the design team’s use of technology to model the acoustical properties of the space, which guided the wood panel design and placement. “We met with the contractor at the 35 percent design completion stage to begin discussions of the panels. Without the early collaboration, the efficiencies of computer modeling and modern fabrication methods, the design could not have been built within the project budget,” Mirvish states. The center’s own production crew installed the AV system and fabricated the chandeliers in the lobby.

In addition, deployable fabric drapes and retractable banners are acoustical solutions that also accommodate the many styles of performances in the Terrace Theater.

Prior to the renovation, the Terrace Theater’s lobby was modest and lacked a strong connection to the theater. The design team opted to gut the lobby and transform it with curved walls and an open staircase. A new elevator to the lower level of the theater accommodates people with disabilities, and the restrooms were reconfigured for better accessibility. The lobby is punctuated by a striking glass sculpture by famed American sculptor Dale Chihuly.

Although no specific green-building certification was pursued, Quinn Evans implements sustainable features in all designs as a matter of best practices. Minneapolis-based Forest Stewardship Council-certified wood was specified wherever possible. Energy-efficient LED lighting was implemented to reduce energy consumption and reduce heating gains. Specific areas have color-tunable lighting to enhance the mood of the space for performances. Energy efficiency also was considered in the HVAC systems by reducing the intake of outside air by as much as 79 percent. The theater also has experienced a 46 percent reduction in water use despite a 25 percent increase in the number of water closets.

The renovation also features upgrades to help the crew operate the space more efficiently. “Because this is a smaller venue, it’s run by a small crew that had to run all over to operate the space during performances,” Mirvish remarks. The space now features one lighting position from a catwalk and box booms, reconfiguration of the technical booths, and a new audiovisual system that has enhanced operations and made the theater more efficient and safer to operate by a small crew.

The renovation, which was completed in 2018, brings a visual richness to the theater that it lacked previously. “The theater finishes were quite dated and cold and were in need of updating,” Mirvish recalls. The new color palette of deep purple fabrics and vibrant red curtains gives the theater a modern feel while being pleasant to the eye, and the medium-toned wood acoustical paneling brings a warmth that was missing.

One of the most exciting aspects of the project for Mirvish was seeing the finished product and having it perform the way the design team intended. The project has received rave reviews from patrons and performers who were familiar with the space prior to the renovation, as well as media outlets, like The Washington Post and Classical Voice North America. All are amazed at how wonderful the space looks and sounds after the renovation.

The renovation of the Terrace Theater breathes new life into one of the busier venues at the John F. Kennedy Center for the Performing Arts. With the accessibility modifications and a fresh visual appearance, it will continue to be an exciting venue in which to see a performance for many years to come.