“Combining these different products that the owners needed and also maintaining an extremely high level of clarity in the glass was a challenge,” Kennedy adds. “Every time you add a different layer you’re going to affect the clarity of the glass. The challenge was meeting the design needs while maintaining a very high-level aesthetic.”

The Guardian and Pilkington products were shipped to Serious Materials’ factory. There, workers placed the suspended film in the air space between the two lites of laminated glass, ultimately fabricating a 1 3/8-inch insulating glass unit. The air space then was filled with a mixture of argon and krypton.

Once the insulated glass units were shipped to the Empire State Building, they were transported to the 102nd floor and installed at times that wouldn’t interfere with typical building operations, including observatory visitors’ hours. “We worked at night—2 to 7 a.m.,” Kennedy remembers. 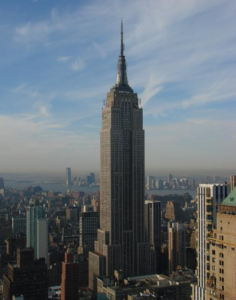 The 1/2-inch existing glass was removed from the frame, and then Kennedy’s crew installed the 1 3/8 insulated glass unit into the existing frame. “We had to come up with a custom glazing bead to reuse the existing frames,” Kennedy recalls. Because the windows are in-swing awning vents, the installers were easily able to apply a cap bead on the outside to seal the glass on the exterior. The entire job on the 102nd floor took the team four days to complete.

“This was truly a collaborative effort,” Kennedy says. “We had a lot of help from the manufacturers who are, in many regards, competitors. The collaboration between the design team and manufacturers, who worked together toward a common goal that met the many needs of the owner, was great to see.”

Out of the roughly $500 million budget for capital improvements at the Empire State Building, the total cost of the energy-efficiency work was about $13 million, Malkin says. He adds the building has experienced savings of approximately $4.4 million per year, which will achieve the project’s return on investment in less than the five years anticipated. “When you’re doing work that needs to be done anyway, that’s when you should be looking at energy efficiency. The costs then are not very great while the returns are huge,” he says.

However, what’s most rewarding to Malkin is the project has repositioned the Empire State Building as a modern office building. He explains: “The whole goal here is not to look at the Empire State Building as some sort of archaeological dig. It’s vibrant and attracting the best-quality tenants; the energy efficiency is a major lure. Hopefully, frankly, that breeds envy, and envy will breed duplication, and duplication will yield a better overall result for the environment.”