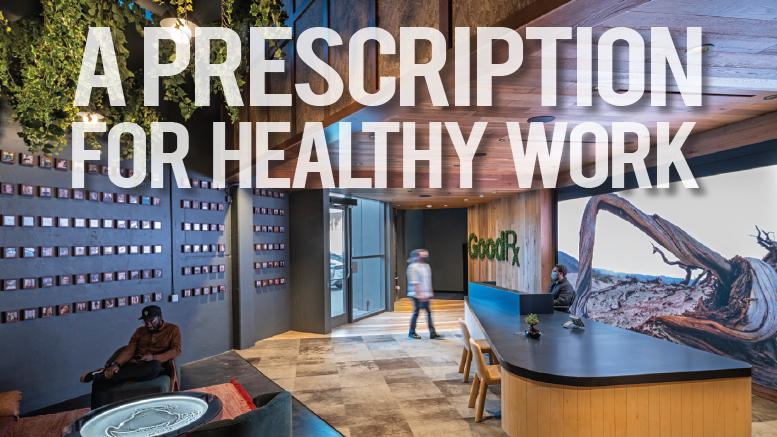 Founded in 2011, GoodRx is an app-based health-care company that tracks prescription drug prices in the U.S. and provides free drug coupons for discounts on medications. The demand for discount pharmaceuticals has resulted in rapid growth for GoodRx.

When GoodRx representatives chose a 76,000-square-foot office space in the Pen Factory in Santa Monica, Calif., as the site of their new headquarters, they envisioned an eclectic personal family room that would meet the needs of GoodRx’s growing staff. In addition, GoodRx leadership wanted the new work- place to encourage wellness and community, similar to how the company conducts business.

Completed in May 2020, GoodRx’s new office is a creative space with enviable amenities, including a coffee bar with a full-time barista; a library composed of structural steel; a meditation and yoga facility; three interconnecting stairs; a mezzanine for group huddles; game room; and a speakeasy with a restored 100-year-old bar from Glasgow, Scotland.

FROM FACTORY TO FANTASTIC

Built in 1956, the Pen Factory manufactured and distributed hundreds of millions of Paper Mate ballpoint pens per year and employed many people in the area until the facility closed in 2005. After closing, the building was supposed to become part of a Transit Village with office and retail space, as well as nearly 500 housing units. This plan was very unpopular in the community and never came to fruition. Later, new owners worked to transform the space into a multitenant creative workplace, ready to house new tenants, like GoodRx. GoodRx representatives were drawn to the space in the Pen Factory because, unlike their last cookie-cutter office on multiple floors of a Santa Monica high-rise, this space offered them the opportunity to really establish themselves in the Los Angeles world of technology as a purpose-driven company in a space that was entirely their own.

Visioning for this project was intentionally focused on ways to make the process equitable, accessible and inclusive, bringing aspirations for wellbeing and sustainability front and center to the project. Architecture firm RIOS utilized focus groups, consisting of GoodRx leadership and mid-level employees, as well as various consultants, to shape the space’s design. The main takeaway was the desire for a creative and unique space that allowed for flexibility and would accommodate a hybrid work environment.

The design of GoodRx’s headquarters was conceived using an urban design point of view, meaning the design team wanted the office to function like a city, constantly evolving and incorporating diverse settings all under one roof. The circulation “loop” features a stained concrete black band on the floor for wayfinding. Large, open areas can accommodate growing staff numbers but still feel cozy no matter how many individuals are present. The use of local, upcycled materials increases connection to the local community.

The design palette is raw and industrial, yet warm. RIOS’ team designed the space with a hospitable feel. Convenient amenities, like a juice and coffee bar; an abundance of greenery; and warm materials, like corduroy, exude hospitality. Within the larger scope of the warehouse-style office, there are areas intentionally closed off that provide a more intimate feel. Large industrial containers, covered with upcycled oriented strand board, create some of these intimate spaces, as well as nod to the building’s history, alongside elements like the steel gantry, once used in the production of ink pens.

Like most companies, GoodRx is operating in a hybrid work environment. Company leadership has found that employees want to be social when they are in the office. Because of this, 80 percent of seating is unassigned, allowing employees to choose their daily work environment. Currently, employees have an estimated 150 square feet per person.

As an expression of GoodRx’s brand, the design emphasizes wellness in the workplace. For example, the space opens to surrounding gardens and a dog park that extends the length of the building. Bike storage and showers are available to encourage healthier forms of transportation to work.

Six skylights bring natural sunlight throughout about 35 percent of the facility, complementing light from the existing windows.

The “Central Park” area is an open, communal space used for companywide meetings and presentations from the CEO. Its name was inspired by the interior planters filled with live, lush plants, tree specimens and native shrubs. The plants, trees and shrubs are watered using a self-contained irrigation system that can be dropped into decorative pots.

Nhan Nguyen is senior vice president of Clune Construction. With 22 years of construction industry experience, Nguyen has a track record of leading successful projects for high-profile clients throughout Southern California.