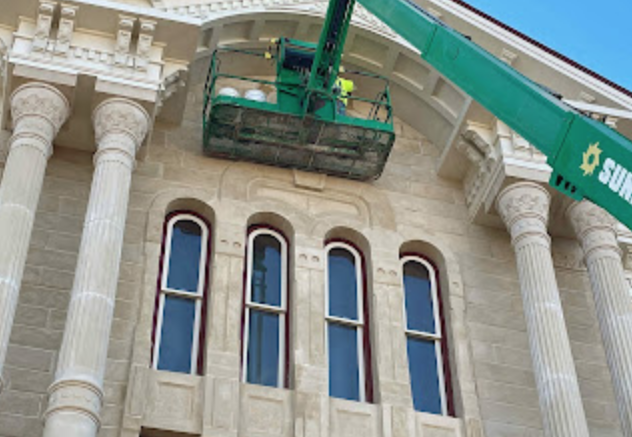 Although many had hoped 2021 was the year to emerge from the grip of the COVID-19 pandemic, the construction industry continued to struggle with unprecedented challenges. Problems such as labor shortages, supply-chain delays, rising costs, and financing hurdles have plagued the industry over the past 12 months. Just when one thinks we can see a light at the end of the tunnel, the light turns into another gut-wrenching variant in the form of Delta or Omicron. Deliveries are delayed, orders postponed, flights cancelled, etc. The list goes on and on.

After close to two years of having to deal with a myriad of external challenges, the construction industry is suffering from COVID fatigue. So it is during this period of staggering price increases and problematic construction delays that I present to you a story of hope and revitalization. During the past two years, Re-View Windows worked on a preservation project that serves as a great example of what is possible. I present to you the restoration of the Fannin County courthouse in Bonham, Texas.

The history of the Fannin County courthouse is not the glamorous one that you would expect for a National Landmark. Constructed in 1888, the building was one of many courthouses designed by Texas architect Wesley Clark Dobson. The structure’s rough-cut limestone, distinctive mansard roof and cherry-top clock tower gave it unique architectural appeal. In 1929 a fire destroyed the roof and the clock tower, and both were discarded in favor of a cost-saving flat roof. If abandoning its architectural trademark wasn’t bad enough, 36 years later the courthouse was modernized by replacing all windows and installing a flat stone cladding around the entire exterior to modernize the structure. Many have likened this Brutalist conversion to a vintage Cold War-era Eastern European architectural style. The converted building became a mundane shadow of its original beauty.

In 2016 the voters of Fannin County were called to determine the fate of their beleaguered community centerpiece. It wasn’t an easy decision because the costs to restore the building to its original grandeur were more than constructing a new courthouse. A large grant from the Texas Historic Commission (THC) was a significant factor in making revitalization a feasible option.

When the exterior stone cladding added in the 1960s was removed, the damage to the original limestone rendered the structure’s appearance similar to a bombed structure in Dresden, Germany, during WWII. The collective experience of the craftsmen involved in structural, masonry, millwork and roofing was staggering. The masonry restoration work itself was absolutely epic. Re-View was brought in to manufacture replica mahogany windows to match what would have been in the courthouse from its early days. Our team even matched the weight and pulley balances that existed in the original windows back in the day. Meticulous attention to detail on thousands of features like this were attended to by the architectural team at Architexas.

The courthouse is scheduled to reopen in early 2022 and now stands as an example of what a community can accomplish given extreme conditions. Add a pandemic-tainted construction schedule to the mix and the restoration is truly remarkable. The resulting rebirth of the 1888 courthouse will not only alter the town square in Bonham, Texas, but will forever change the community’s future. This is obvious as you drive into Bonham and see the clock tower beaming in the distance from miles away.

Let the magnificence of the restored Fannin County courthouse serve as a beacon of hope for all of us as we move beyond the pandemic in 2022. Fannin County shows us that the path to grace and beauty is often littered with challenges.

Brooks Gentleman has a master's degree in business from Southern Methodist University and a bachelor's degree in economics from Colorado College. He comes to Re-View with 25 years of window experience.

Experts Share Financial Relief Programs in the U.S. and Canada

Webinar Aims to Assist Building Owners Through the Pandemic Shutdown

Be the first to comment on "A COVID Renaissance"