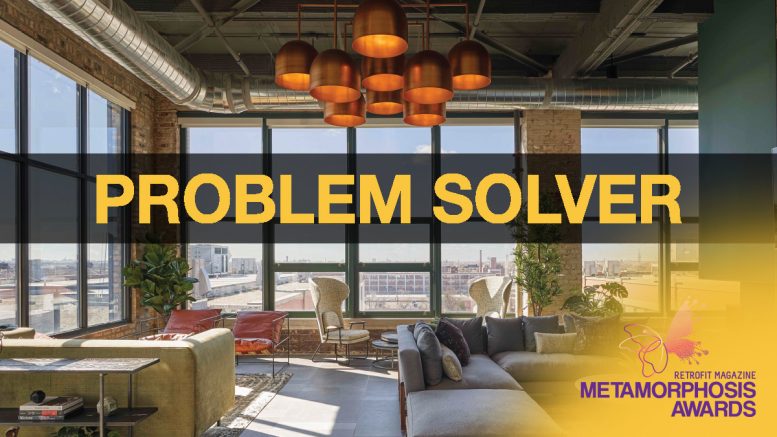 Chicago is a proud city. Proud of its history, proud of its buildings and proud of its distinctive neighborhoods. Although locals may differ on the neighborhoods’ exact names and boundaries, a 1993 city ordinance officially divided Chicago into 178 neighborhoods, each with its own claims to fame, such as restaurants and breweries, unique shopping, and annual celebrations and festivals that attract Chicagoans, suburbanites and visitors alike.

The northwest side of the city is known for its industrial past because of the railroads that crisscross the area. It contains several blue-collar neighborhoods, including Logan Square, which has become a hot-spot in recent years with its quirky coffee shops, art galleries and music venues, and Belmont Gardens, which borders Logan Square to the west and is among the smallest but most densely populated neighborhoods.

Teetering along the boundary between Belmont Gardens and Logan Square is a 1.5-million-square-foot concrete warehouse built on 22 acres in 1928 for Olsen Rug Co. As one of Chicago’s largest employers for years, Olsen Rug’s warehouse became a neighborhood and city institution. During WWII, when resources were scarce, people sent scraps of rugs, clothing and rags to Olsen Rugs to be turned into area rugs. When the building changed hands in 1963, it was sold to another iconic Chicago business, Marshall Field’s. Known as Field’s to locals, the retailer used the warehouse to store furniture. The building remained active for a few years after Macy’s purchased all of Field’s assets in 2004.

However, by 2008, Macy’s closed the warehouse and it sat vacant until 2013 when a Chicago developer began creating a unique mixed-use development within the structure. With its ample space, the building, now known as The Fields, includes a grocery store, indoor parking and warehousing, as well as light manufacturing, office, retail and residential space.

The residential units, in particular, posed design and financial challenges. The Fields’ location—in an emerging area with a mostly working-class population—could not justify the high-end rents of neighborhoods closer to downtown. To succeed, the developer had to price the residential units affordably to attract a wide range of renters, including people already in the neighborhood who could appreciate The Fields’ raw, rustic charm.

SUPPORT FOR A UNIQUE IDEA

While the mammoth warehouse stood abandoned, there had been numerous proposals from various developers to replace the iconic structure with a large retail development, though the idea wasn’t popular. Nobody in the community wanted to see the building torn down, recalls Principal-in-charge Howard Hirsch, AIA, ALA, LEED AP, founder and president of Hirsch MPG. When the new owner came forward with a unique mix of live, work and play solutions for the building—practically a city within a city—the idea for The Fields was launched.

Hirsch’s goal for every client is to listen carefully, ask the right questions, and provide creative and appropriate solutions. Thus, his team initially was hired in 2013 by the developer to establish some basic parameters, such as what parts of the warehouse would be appropriate for what use. “It was a year or two of getting everyone comfortable with this odd mix of uses that were going to be put in the building,” Hirsch says. “The most controversial use was the residential portion of it. This is a neighborhood that is very concerned about gentrification and was concerned if market-rate residential units came in, it would start gentrifying the neighborhood. The developer landed on this live-work concept, which is something the city had been talking about but had not really been done.”

Hirsch and his team began laying out a design for live-work units, but the idea stalled because it was too limiting as to who could actually live and work in The Fields. “The laws required that whoever opened a business there and lived there had to have a business license,” Hirsch says. “There are a lot of professionals, like architects, for example, who don’t have business licenses in Chicago, so this idea became difficult.”

Meanwhile, the developer was moving forward with the infrastructure for other parts of The Fields. The grocery store came to fruition, and a warehouse began operating in the building. To reignite the residential idea, the developer determined the units had to be small and geared toward younger people who wouldn’t mind close living quarters but still could appreciate the uniqueness of the building.

“We spent a lot of time amending the plan from the original 84 live-work units to 123 loft-style units,” Hirsch remembers. “These units have 14- to 17-foot ceilings, massive windows and a raw concrete look to them. After a change in the alderman [an elected official who represents a ward, composed of several neighborhoods, on Chicago’s city council] and a bunch of community group meetings, we got buy-in from the community and the alderman to switch it to a true residential product.”

A mix of one- and two-bedroom units, along with junior one-bedroom units, which are similar to studio spaces, was created. The units range from 542 to 1,330 square feet, larger than comparable new-construction projects in Chicago but 20 to 30 percent more affordable, Hirsch says.

Rather than designing typical borrowed-light bedrooms, Hirsch and his team took advantage of The Fields’ high ceilings and large windows and created thinner, deeper units. The units are segregated into zones, meaning they aren’t divided by walls but by furniture or cabinetry, which gives the impression they contain a true bedroom (or two). “It makes the unit feel bigger because it doesn’t feel broken up into smaller pieces,” Hirsch notes. “A small bedroom with a 17-foot ceiling feels very awkward, but if a bedroom is just defined by a partial closet or piece of furniture, the whole unit feels bigger.”

The almost full-height industrial windows certainly are a benefit to the units but also could have been a drawback because they were not energy efficient. “We really couldn’t do anything with the windows because of budget and the sheer amount of glazing, but we knew we had to meet certain standards of comfort or people wouldn’t want these units,” Hirsch states. “The system that we used for heating these spaces— because they’re so tall—is a VRF system. We located the units directly under the windows, so that allowed us to offset the hot and cold air that’s coming in through those windows right at the source.”

A complaint of many apartment and condo dwellers is hearing their neighbors too well. Fortunately, that is not the case at Fields Lofts. The 10-inch-thick concrete between the floors of the building mitigates sound transfer vertically. To ensure noise doesn’t travel between side-by-side units, Hirsch MPG followed its standard multifamily acoustical design, which features multiple layers of drywall and insulation for sound attenuation.

Because the ceilings are so high, linear LED lighting was hung at about 10-foot level. Under-cabinet lighting highlights the streamlined Italian-style kitchen cabinetry. In addition, each kitchen features a moveable work surface that can be used as an island or a kitchen table.

The sixth floor of The Fields originally contained an odd, 3,000-square-foot space with 20-foot- tall ceilings but a lack of rhythmic windows, so lofts couldn’t easily be built in this area. The floor also was about 3-feet lower than the fifth-floor roof, so the team raised the floor with a lightweight fill material and then poured a new slab to align it with the adjacent roof. The team then created a walkout to the roof, which features a sun deck, barbeque stations and a dog run. “There are beautiful views of the city skyline because there’s nothing taller than this building for quite a distance,” Hirsch says. “The developer wanted to take advantage of these views.”

The interior of this sixth-floor space became a co-working area, ultimately achieving the live-work idea the developer originally planned. Glass walls, built-ins and furniture create separate co-working and lounge areas. In addition, a shared kitchen, large fitness center and bathrooms are available for resident use. Access to the co-working area is provided by two new elevators, which were inserted into the concrete structure and also serve the residential lofts.

The design team wanted residents to remain familiar with the heritage of The Fields so pre-renovation photos are hung throughout Fields Lofts’ common spaces. “Harken Interiors, who was instrumental in developing the planning and the look of the amenity spaces, as well as the lobby, corridor and unit finishes, did a lot of research on the history of Marshall Field’s,” Hirsch recalls. “They found old Marshall Field’s signage from the building, which was used in the co-working space, and incorporated Field’s iconic shade of green throughout to bring a little bit of history to the development.”

Hirsch MPG spent five years—from basic planning in 2013 to completion of the residential lofts in May 2018—working on The Fields and Fields Lofts. The firm continues to work on other phases to this day. Its team members are pleased the project fills a niche in Chicago for high-end, contemporary dwelling units—with coveted parking—at a lower price. “This building meets the needs of younger people who are being priced out of many neighborhoods and are looking for housing further from downtown but still within the city,” Hirsch says. “Knickpoint [one of the developers] is looking at bringing in a whole array of retail, restaurant, maker-spaces and more into this area.”

Hirsch is gratified that the design and construction teams, along with forward-thinking developers, were able to repurpose a beautiful building that is important to Chicago’s blue-collar history. “This building is a one-of-a-kind structure and I hated the thought of tearing it down or doing something that was detrimental to it,” Hirsch says. “It has been wonderful to see this underutilized property be developed in a way that upholds how it fits into the neighborhood while preserving the historic feel of the building.”

Be the first to comment on "A Massive Chicago Warehouse Now Is an Eclectic Mix of Uses, Including Thoughtful and Affordable Lofts"