Colin and Deanna Crossman sit in an elegantly appointed parlor of the King’s Daughters Inn, looking out across the street to the oaks that adorn the campus of Duke University in Durham, N.C. They are the proud owners and proprietors of a boutique bed and breakfast that was once a historic rest home. The transformation required a massive retrofit to an 80-year-old, 17,000-square-foot Colonial building that has earned numerous awards for both historic preservation and sustainable lodging.

“We thought this would be a really good fit for who we were and what we loved in life,” Deanna said. “So we looked at the numbers and decided to go for it. The numbers worked. The location can’t be beat. The history is just fabulous. The building is gorgeous.” She paused, taking a deep breath and looking around the room. “This is really a once-in-a-lifetime thing you get to do.

“And we get to live here, which is just icing on the cake.” 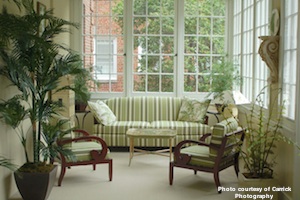 The light-filled, south-facing sunporch is a popular retreat for guests.

The King’s Daughters Home was established in 1911 to provide subsidized housing to single, aging women. With the help of donations by the Duke family—which also founded the eponymous university—the home moved in 1926 into the two-story brick building that stands today in the heart of Trinity Park, a historic neighborhood near Duke University and downtown Durham. With the addition of an annex in 1957, the building was home to as many as 34 women and nine full-time, live-in staff members.

The growing popularity of retirement communities in the 1990s, however, proved to be the death knell for old-fashioned, dormitory-style housing for the elderly. By the early 2000s, only a few of the original 29 bedrooms were occupied, and in 2006, the Sheltering Home Circle which ran the King’s Daughters Home was forced to close the institution and sell the building.

Deanna and Colin Crossman at the official ribbon-cutting ceremony for the opening of the King's Daughters Inn in 2009.

The home was on the market for more than a year, and the Sheltering Home Circle denied several overtures by developers to turn the building into condominiums, retail establishments and other ventures. When the Crossmans approached the Circle, they knew they were making an offer well below the asking price, but their vision of a bed and breakfast that would preserve the history and character of the building was enough to convince the Circle that the Crossmans were the right buyers. Today the ladies of the Circle hold their monthly meetings at the inn, and the relationship between past and present is something the Crossmans appreciate. “We have 40 new grandmothers,” Colin noted. “This is their legacy.”

Colin and Deanna Crossman, a couple that met while retrofitting homes across the street from one another, are particularly well-suited for such a project. Take their honeymoon, for example. Rather than your typical getaway, the Crossmans went to Maine to attend a three-week course in general contracting at The Shelter Institute. After several years honing their skills by renovating residences, Colin and Deanna felt the time was right to set their sights on something bigger.

Be the first to comment on "A Royal Retrofit"