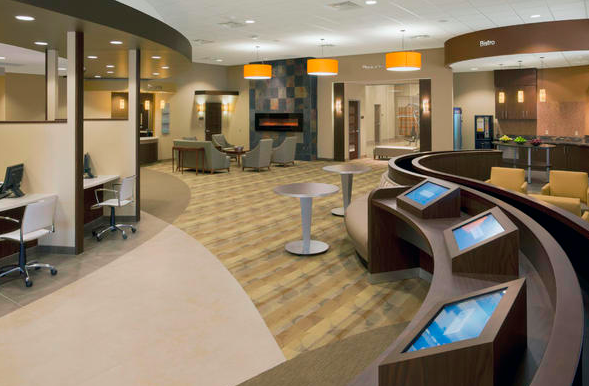 The self-registration desk in the lobby of the Minimally Invasive Spine Institute, Dallas, is reflective of the trend toward a retail approach to the design of health-care facilities. Photo: Courtesy of HDR Architecture Inc.; © 2011 Mark Trew

You don’t have to be a medical professional or a career politician to know that change is underfoot in the world of health care. The Patient Protection and Affordable Care Act (ACA), or Obamacare, which was enacted as law in March 2010, is the largest reform to the American health-care system since the establishment of Medicare in 1965—and it has been steeped in controversy since its inception. 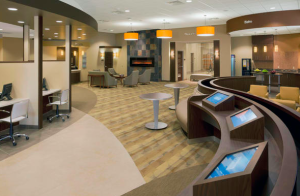 The self-registration desk in the lobby of the Minimally Invasive Spine Institute, Dallas, is reflective of the trend toward a retail approach to the design of health-care facilities. Photo: Courtesy of HDR Architecture Inc.; © 2011 Mark Trew

Regardless of your political stripe or how you feel about the ACA, the fact is that existing models for the delivery of health care are already in the process of changing, and key players in the health-care design and construction market would do well to take note of the shifts this sweeping legislation has initiated. In many ways, the success of health-care reform hinges on the built environment even though the ACA was not designed with medical facilities specifically in mind.

As noted in a report from the American Institute of Architects’ Academy of Architecture for Health, architectural recommendations and design decisions have a lasting influence (typically decades) on health-care facilities and on those who utilize them, unlike much of the healthcare regulatory and policy environment, which can be quite transitory. Further, the authors of the report, “Healthcare Architecture and the Affordable Care Act”, point out incentives within the ACA will reward health-care providers that improve quality and patient satisfaction—outcomes that have been directly linked to the design of buildings, putting design and construction professionals in a position of exceptional leverage in the market.

From an increase in the number of renovations and types of health-care facilities being constructed to new models of care, the health-care market landscape is being permanently altered as a result of the ACA. Here’s what to keep in mind in the near and more distant future:

Given the fact that the U.S. spends 18 percent of its GDP annually on health care, it’s not surprising that reducing costs would be a priority for national leaders. Ultimately, this goal resulted in the passage of the ACA, according to the AIA report. However, as Charles H. Griffin, AIA, FACHA, EDAC, senior principal at WHR Architects, Houston, and co-author of the report, points out, the ACA “is really an outlook. It is trying to bend the cost curve, yet there is really not a lot in there specifically about cost. It is really about improving quality outcomes—coming up with different measurements that are tied to performance that are then tied to a reimbursement structure.”

The problem is that it’s unclear how the new compensation model under Obamacare works in practice, so health-care providers are hesitant to invest money on infrastructure improvements that aren’t absolutely necessary, Griffin notes. Instead, they are upgrading IT systems to meet the federal electronic medical records mandate under the ACA as the health-care construction market has slowed since the recession began in 2008. As a result, we’ll see fewer new medical construction projects and an uptick in renovations and retrofits of existing health-care facilities.

“One of the mandates of the Affordable Care Act is that hospitals and systems implement electronic medical records, so there’s been a tremendous investment in technology,” says Hank Adams, AIA, ACHA, EDAC, vice president and director of health care at HDR Inc., Dallas. “We’re seeing fewer replacement hospitals and large expansions of hospitals and more focus on retrofitting and renovating existing facilities because of all this money that’s been funneled into technology and into acquiring physicians and into mergers and acquisitions. So it’s a less capital-intensive approach to facilities right now and more in other areas that are unrelated to what we do.”

Because the performance-reimbursement structure under the ACA is not completely understood by health-care providers yet, the decision to build or improve facilities in many cases has been deferred and will continue to be at least in the short term.

App Estimates Amount of Sealant or Coating Needed for Projects

Air Curtain Spans Up to 10 Feet

Be the first to comment on "As the Affordable Care Act Rolls Out, the Health-care Market Is Adapting to Change out of Necessity—But That May Not Be a Bad Thing"