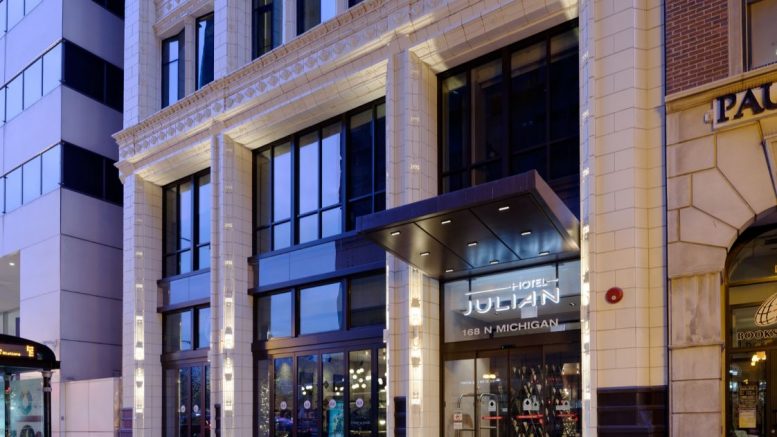 The Michigan Avenue wall is an iconic part of what makes Chicago such a special place. It is full of beautiful examples of historic architecture, modern interventions and terra-cotta-clad buildings. The Hotel Julian is the renovation, addition and adaptive reuse of one of these iconic structures: the Federal Life Insurance Building of 1911, designed by the noted Chicago architect Benjamin Marshall (Marshall and Fox). This once beautiful terra-cotta-clad structure sat vacant and in major disrepair after a failed redevelopment attempt. Saving it from the wrecking ball; adding five floors and a penthouse to the top of the existing structure; and transforming it into the Hotel Julian, a boutique 210-room hotel, has helped preserve an important part of the city’s history and extended the scale and character of the Michigan Avenue wall north of Millennium Park.

Leading the charge on this project was local design firm Hirsch MPG LLC, which earned the Second Place prize in the Whole Building category of retrofit’s second-annual Metamorphosis Awards for its work on the hotel.

When the project team started on the design in 2016, the existing structure was in bad shape because of the partial demolition performed by a previous developer. Thirty to 40 percent of the terra cotta was missing or damaged, including on the first three floors, which had been removed during a mid-century modern renovation in the 1960s. Large holes had been cut into the clay-tile-arch floor structures. The roof was leaking, windows were missing and wet construction debris was piled in the basement.

From this starting point, figuring out how to insert new vertical transportation elements within the compromised existing structure, reinforce the existing structural elements for the increased lateral and gravity loads, and add additional floors on top—all within a very limited footprint—required detailed coordination. Creative construction techniques were needed because of the small site that would not allow for a tower crane or adequate staging areas. The team worked together to reinforce the existing structure to support mobile cranes on the highest constructed floor to erect the floor above; then, the crane was raised to continue construction upward.

The 12-story steel-frame and clay-arch building was originally designed for a future 4-story addition. Although original construction drawings for the building were obtained through the Benjamin Marshall archives located at the University of Texas, no images of the building with its future 4-story addition could be found. The addition itself was clad in a facetted, chamfered glass curtainwall that extended down through the terra cotta into the punched openings of the original façade, aligned with the curtainwall above.

The building’s existing terra-cotta façade underwent a careful restoration with each piece identified for cleaning, repairing in place, repairing in the shop or replacing with new.

INSPIRATION FROM THE ORIGINAL

The Hotel Julian project allowed a beautiful but deteriorated Benjamin Marshall building to be saved and transformed into a unique addition to the Chicago skyline and Michigan Avenue streetscape. From design, engineering and construction viewpoints, there were many obstacles overcome and creative solutions implemented. Completed in 2018, the modern design is fully integrated into the old, creating something better than could have been achieved by tearing down or renovating the existing structure on its own.

To read a full feature about the Hotel Julian, including materials list and extended team list, see the September-October issue, page 48, or visit bit.ly/3lZdScZ.

Be the first to comment on "After Major Structural Work, a 1911 Building Receives the Addition Its Original Architect Had Intended"