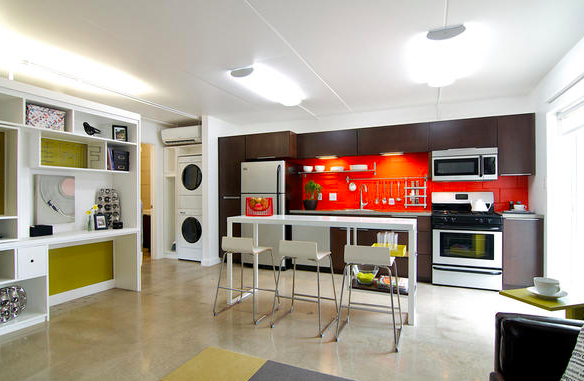 Before the team started work, it tested ideas on a single unit to see how they worked. PHOTO: Adaptive Creative

A multifamily complex in Fayetteville, Ark., stands out from other apartment buildings in the area. Built between 1968 and 1972, the 96-unit complex, which is spread through four buildings, each with three floors containing eight one-bedroom apartments, recently underwent a gut rehab. A large team of experts transformed it from a dilapidated community into a LEED Platinum-certified facility; LEED is a program of the Washington, D.C.-based U.S. Green Building Council. Today, the complex, which is known as ECO Modern Flats, has set a sustainability example for Fayetteville and beyond. 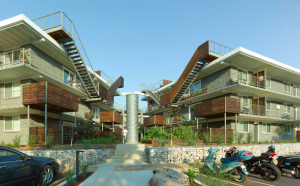 Fayetteville-based Specialized Real Estate Group, the project developer, aimed to produce a rental property that was modern; urban; and green, which would save on operations costs through energy- and water-saving techniques.

“The apartments felt very small and dark before,” recalls Jeremy Hudson, partner and CEO of Specialized Real Estate Group. “They were divided into small, wood-paneled rooms. In terms of resident comfort, they were terrible. The poor insulation meant the top floors were scorching in the summer and drafty in the winter. The landscape was dominated by pavement and there was only minimal space for enjoying the outdoors.” Today, each apartment unit boasts an open floor plan with ample natural light and separate outdoor living space.

Jacob Tankersley, owner of Springdale, Ark.-based GB Group Construction, a green-building contracting firm, became involved with ECO Modern Flats through a previous relationship with Hudson. “I lean toward environmentally friendly building practices in the residential market, which is part of the reason Jeremy brought me in,” Tankersley says.

From preliminary talks, green was always a goal. “My priorities were to rein in expensive utility costs and create apartments that protected indoor air quality,” Hudson says. “Our biggest investments were energy-efficiency measures: solar hot water, insulation and replacing a boiler system with individual mini-splits in each unit. Working with our architects, we were able to locally fabricate balconies, rooftop terraces and a green screen at a price that fit our budget.” 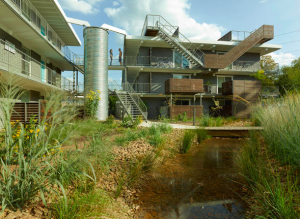 Two cisterns made from steel culverts collect rainwater from rooftops, which is used in landscape irrigation and to water the community garden. PHOTO: Timothy Hursley

“We were looking at the energy-efficiency side of things for practical purposes based on utility costs and the benefits to having rental properties with low utilities,” Tankersley says. Although green was high on the team’s mind, LEED didn’t come about until later in the process when Little Rock, Ark.-based Viridian, the energy consultant, introduced the team to the green-rating program. The team decided to pursue certification.

Once LEED became part of the equation, Tankersley says everyone’s mindset shifted to what was necessary to become certified. “A third-party rater said we could reach Platinum level if we met certain criteria,” he says. “We came together as a group to talk through specifics and exactly what to do. It was much more of a team effort once we started down the LEED path.”

Faucets Are Offered in Wall-mounted and Deck-mounted Styles