Issues associated with air infiltration through a building’s thermal shell have been steadily gaining attention in the construction industry. It’s for good reason: A leaky building will cost appreciably more to operate in energy costs and reduced equipment life; it will be less durable; it will be uncomfortable and potentially unhealthy; it also will contribute more air pollution than a tightly constructed building.

Not long ago, it generally was believed that a tightly constructed building would lead to problems with mold growth—the mere mention of which could ruin an entire decade of a contractor’s life. We now know mold growth in a tightly constructed building is likely only to occur if proper mechanical ventilation is not installed. These days, the saying is: “Build it tight, and ventilate right!”.

However, properly ventilated or not, air leakage through the building shell will cause condensation in wall cavities and increase the probability of mold growth in most U.S. climate conditions. Whenever warm moist air is allowed to contact a sufficiently cooler surface, moisture will condense on the cooler surface. If we can stop the air from flowing (leaking through the building shell), we can stop the continued condensation within the exterior wall cavities.

Along with limiting mold problems, a tighter building shell will save energy because conditioned air is no longer lost to the exterior. The heat that rides along with the air that actually flows to the outside is called “convective” heat loss. The Washington, D.C.-based U.S. Department of Energy estimates nearly 30 percent of the energy used for heating and cooling our buildings is lost because of air leakage. It should also be mentioned most types of insulation and building materials will lose their insulating ability if they get wet (from condensation) or are subjected to a constant flow of air through or over them. The reduced R-value of the insulation leads to another type of heat loss that is referred to as “conductive” heat loss. The conductive heat loss is separate from and occurs in addition to convective heat loss. 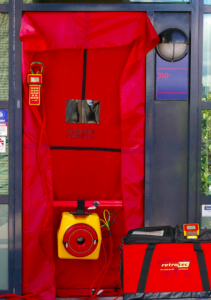 Advanced computer control software and fan technology allow for any number of smaller hand-carried fans to be connected together, allowing relatively easy testing on buildings of almost any size. Photo: Retrotec Inc.

Historically, most builders have argued against constructing buildings that were tight for fear of creating the dreaded “sick building syndrome.” This mindset is being rapidly reversed. We now have the means with which to reliably eliminate the risks of creating such problems. For example, advancements have been made in blower-door and duct-tightness testing equipment, and new testing protocols and straightforward ASHRAE ventilation standards are available.

Building owners often are quizzical about testing and tightening their buildings to virtually eliminate air leakage and then installing a fan to bring in outside unconditioned air. However, because the volume of air leakage is dependent upon many factors, including temperature differential from inside to outside, wind speed, the height of the structure, etc., the actual amount of air coming into the structure at any given time is hard to estimate.