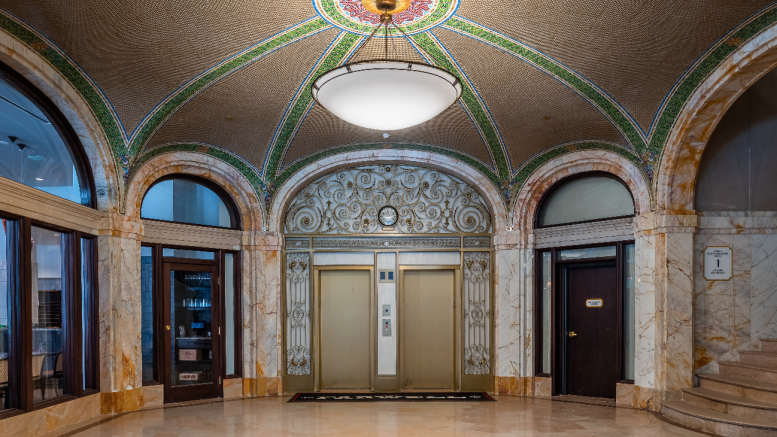 The renovation of the Farwell Building in Detroit by Kraemer Design Group is a dramatic transformation from an abandoned, dilapidated office building into a prime residential property with second-floor offices and ground-floor restaurant space. The awe-inspiring rehabilitation earned Kraemer Design Group an Honorable Mention in the Historic category of retrofit’s Metamorphosis Awards.

BEFORE and AFTER PHOTOS: Kraemer Design Group

Located on Griswold Street in Capitol Park in the heart of downtown Detroit, The Farwell Building was built in 1914. The architect was Harrie W. Bonnah, one of the first architects licensed in the state of Michigan. He designed the Farwell Building with his firm Rogers & Bonnah Architects. The project started as a concept to transform the small structures in Capitol Park into high-end office and commercial buildings. Originally built to house shops and offices, over time the distinguished high-end commercial hub became a deteriorated broken shell of its former grandeur as building owners changed and the commercial and office tenants left behind vacant premises.

In 1956 the ornate terra-cotta cornice with historic Pewabic tiles was removed and bricked over, and the ground level underwent significant changes. A fire in the building caused interior damage in 1974; the Tiffany chandeliers in the lobby were removed in 1975; and by 1984 the building was vacant. The Farwell Building remained vacant for the next 35 years, becoming known as one of the most deteriorated historic buildings in downtown Detroit.

While vacant, scrappers removed metal railings, equipment and systems and the building was heavily covered in graffiti. The extensive level of interior deterioration gave the building a dramatic, distinctive post-apocalyptic feel and the Farwell Building was featured in several major motion pictures during its days as an abandoned building. The deteriorated atrium, with murky, deep views and half-missing guardrails, particularly captured the imagination of action-film directors. “Transformers 3” (2010), “Transformers: The Last Knight” (2016) and “Batman v Superman: Dawn of Justice” (2016) all include scenes filmed in the Farwell Building prior to renovation.

Kraemer Design Group was hired by the developer, Capitol Park Partnership, as the historic consultant, architect and interior designer for the 8-story building. Seeing through the grime, Kraemer Design Group documented historic features and materials to be restored and preserved in compliance with requirements for historic tax credits. The firm’s research into the building’s history provided information needed to reconstruct missing features, such as the large decorative cornice.

The lobby was characterized by two open vestibules flanked by large wood storefront windows and stained-glass arched windows above, ending in a large octagonal mosaic-tile domed space at the foot of the ornamental stair and elevators. Scrolled architectural ironwork from the exterior was continued on the interior elevator surround and stair handrail. The marble and ironwork staircase was open for the height of the building, and connected by terrazzo flooring to the central atrium that is open from the third floor to the roof. The central atrium is characterized by an ironwork and wood guardrail, as well as a cast-metal elevator surround.

After approximately two years of construction and $40.5 million in development cost, the Farwell Building has undergone a full historic renovation and conversion into a mixed-use development, including residential apartments, office and restaurant space. The Tiffany mosaic-tile domed ceilings, ornamental stair, cast-iron railings, decorative elevator surrounds, and terrazzo floors were repaired and refinished. A new brass elevator surround was created for the main lobby based on historic photos, and a new skylight was installed above the atrium. The northern half of the first floor and a portion of the basement is home to high-end Lebanese restaurant Leila. The second floor was converted to commercial office space. The third through eighth floors were renovated into 82 apartment units. All units are equipped with quartz countertops, stainless-steel appliances, porcelain tile flooring and in-unit washers and dryers. A roof deck available for resident use was constructed offering fantastic views of Capitol Park, the city and surrounding buildings.

The exterior restoration included cleaning and repair of the primary brick and terra-cotta façades. New aluminum-framed windows were installed that match the historic profiles of the original windows. An important part of restoring the exterior of the building was recreating the roof cornice. The new cornice is made of glass-fiber-reinforced plastic to look like the original based on historic photos. All non-historic storefront infill materials at the first floor were removed, and new aluminum storefront was installed in each bay. The decorative metal panels throughout the façade were cleaned and repaired where needed, and new cast-iron scrollwork was installed over the main entry door.

The overall project was approved by the State Historic Preservation Office and National Park Service as complying with the Secretary of the Interior’s Standards for Rehabilitation. The transformation of the Farwell Building from ruin back to its original splendor is one of the most pronounced examples of the resurgence of Detroit.

A Massive Chicago Warehouse Now Is an Eclectic Mix of Uses, Including Thoughtful and Affordable Lofts

Be the first to comment on "Although Its Pre-renovation State Made this 1914 Building Famous, Its Recent Rehabilitation Is Oscar-worthy"