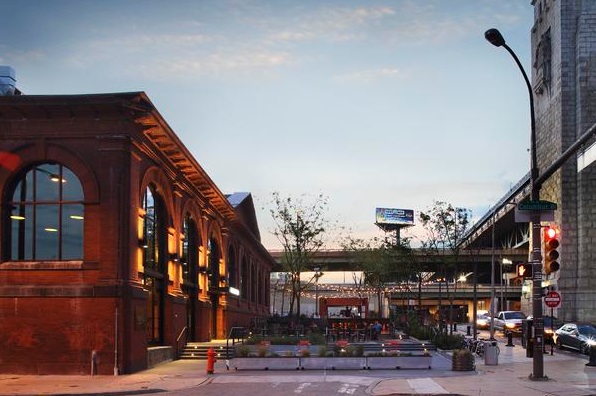 The 10,000-square-foot FringeArts building, a former firehouse pumping station on Philadelphia’s Delaware River waterfront, now is La Peg, a French brasserie. The project team took advantage of the closed-to-traffic area of Race Street to add an outdoor plaza off the restaurant.

Buildings that stand for 100 years often do so by changing with the times. Refashioned from one use to the next across generations, however, obscures a building’s original glory as items are stripped, walls are removed and new materials are added. So when Philadelphia’s Groundswell Design Group received the commission to transform a 1903 firehouse pumping station into a restaurant and plaza on the city’s Delaware River waterfront, the team was delighted the building’s industrial fabric remained.

The 10,000-square-foot FringeArts building, a former firehouse pumping station on Philadelphia’s Delaware River waterfront, now is La Peg, a French brasserie. The project team took advantage of the closed-to-traffic area of Race Street to add an outdoor plaza off the restaurant.

“For decades, this area of town had been neglected and the structure was transferred from a pump house to a storage area for the city,” explains Groundswell Design Group’s Principal David Fierabend. “A lot of the beautiful old buildings fell into ruin here, but nearly all of the rustic character of the FringeArts building was still intact.”

More than a holding place for water, the early 1900s High Pressure Fire Service building played a key role in Philadelphia’s history. By hydraulically pumping water to fire hydrants that could shoot 10-stories high in the city’s core, high-rise developments became feasible. Eventually, the advent of sprinkler systems made its function basically obsolete.

In the summer of 2012, the experimental theater group FringeArts purchased the 10,000-square-foot brick building and divided the space between its new 230-seat performing arts center stage and a 130-seat restaurant that became La Peg, a French brasserie under the proprietorship of Chef Peter Woolsey.

Groundswell Design Group master planned and conceptualized the restaurant and plaza half of the project and brought Stokes Architecture, Philadelphia, into the team. The theater was up and running by the time La Peg’s renovation got underway and, although the two projects are separate, a 30- by 30-foot soundproof motorized door that bisects the building can be opened to create one combined event space.

Fierabend recognized great potential in the 4,200-square-foot cavernous space with its 45-foot ceilings and arched palladium windows. “We looked at all the elements left behind and archived a lot of the materials so we could repurpose them in the restaurant,” he says. “The brash, industrial quality fit our aesthetic vibe for the space, so rather than cover them up we used them as visual moments that tell the story of the materials through time.”

The building features arched palladium windows that provide views of a 1920s metal suspension bridge and trains that pass nearby, taking patrons back to a different era.

For example, during the years, parts of the concrete floor had been chiseled away and the holes had been patched with metal diamond plate. Rather than remove the diamond plate pieces and refinish the floor, Groundswell Design Group left the patchwork exposed. The team created a mezzanine and used existing 1900s metal stairs (that don’t comply with current code) as small mezzanine balconies.

The firehouse’s metal shelving became mezzanine bookcases and the top of La Peg’s new bar. The face of the bar incorporates 1940s wainscoting found in the building. Original doors were restored as restroom doors or those needed for back-of-house functions, like the storage room and wine cellar. Likewise, antique distorted glass with its chicken wire became divisions for storage areas and offices.

“We let the integrity of the space dictate to us what it would ultimately become,” Fierabend recalls. “We kept all the glazed brick. We didn’t try to hide the old plaster. We exposed the nuts, bolts and I-beams. All these things got threaded back in that harken back to the building’s history. Now, they’re conversation pieces.”