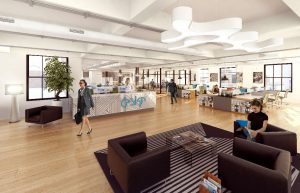 With the assistance from John Milner Architects, the team was able to establish strategic interventions based on an evaluation of the exterior and interior of the entire site. An assessment was based on a tiered system, ranking the buildings on architectural and/or historical significance from the highest level of interest being “restoration” on through to “rehabilitation” and “renovation.” Based on this evaluation system, we determined that the greatest character-defining features of the Union Station Terminal building are the exterior façades (a high degree of integrity); the train platforms and canopies; and sections of the interior spaces, primarily the main and outer concourse at the building’s ground level.

The exterior façade is best categorized as an industrial design style, which incorporates Tudor-style column and cornice motifs. Originally, industrial steel window sashes were used and spaced in a rhythmic proportion with brick spandrels and pilasters. Because the exterior façades were considered to have a high level of architectural and historical significance, the design team approached the challenge by selecting energy-efficient windows with a style and proportions that were respectful of the original windows. The patterned brick was generally stabilized, repaired and then selected areas replaced while retaining all architectural stone features. Finally, exterior lighting was strategically placed to enhance the prominent architectural features of the façade, creating a majestic setting within Springfield’s night skyline.

The main concourse area opens as a grand space featuring expansive, high ceilings and geometric-patterned terrazzo flooring. The space is defined by 12 plaster arches and columns from the outer concourse with natural lighting introduced at the center concourse by using upper clerestory windows. One of the more interesting spaces of the terminal building, it is redefined by the ever-changing levels of light and the resultant patterns of shade and shadows. The inner concourse, like the exterior façades, was considered to have a high level of architectural and historical significance. However, because of extensive water damage to the plaster arches, walls and ceiling, we determined the best course of action was to record and replicate the interiors, including the extensive plaster molding that delineates the arches, as well as the condition of the ceiling perimeter. Again lighting played a critical role. Original light fixtures were reclaimed, remodeled and relocated in the original locations to enhance the prominent architectural features of the interior spaces.

When the program required new architectural interventions, such as the integration of customer-service counters within the outer concourse, the design team selected a material palette composed of porcelain tile, metal and glass. This allowed for a contrast and achieved the desired outcome—that any new expression would be distinctly different, yet respectful of the existing vernacular.

The renovated train station represents a new era of rail travel that builds on the city’s legacy of industrial achievement and innovation.

A Move Forward While Preserving History

To enhance the visitor experience, the design team collaborated with the client and Springfield Museums to integrate a series of wall murals and artifacts from the original Terminal: a baggage cart and barber chair, along with retrofitted benches from the waiting rooms and selected dining ware from the historic Charles Hotel. The interpretive display features vintage photographs and objects, as well as a timeline—all giving a nostalgic view into rail travel. The final stop concludes with a striking image of the renovated station. Purposely curated to signal a move forward to a new millennial Union Station, it represents a new era of rail travel that builds on the city’s legacy of industrial achievement and innovation.

Union Station will not only be a prominent and vital multi-modal facility, it is poised to become Springfield’s “civic piazza,” connecting people through travel while celebrating life through sponsored events, ranging from exhibitions and gallery installations to political events and weddings.

It began as a vision and, through the dedication of Congressman Neal, it appears the transformation is well underway for Union Station, the city of Springfield and the surrounding region.