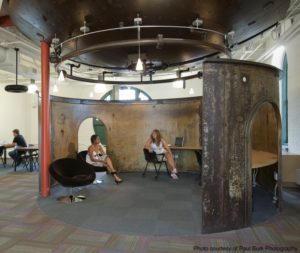 In one instance of the project's reuse of material artifacts, the so-called "Think Tank" makes use of old fermenting tanks from the days when the brewery was still operational.

The design is organized around several original character-defining elements. These include a wood-lined grain silo that became the main elevator lobbies, and former vats and tanks that are now used for a reception desk, work area — the so-called “Think Tank” — and reading room. Historic wood bead-board and the remnant of the original wood stair refer to the Victorian era of the original Brewhouse. These original features exist alongside modern accents that complement the building’s history: the new stair tower is clad in “Victorian” metal shingles; a recycled-glass bottle terrazzo floor lines the main lobby; carpets have circular patterns that mark the location of former brewing tanks and colored glass storefronts match the historic colored glass salvaged from the original broken windows. Glass is used wherever possible to create transparency throughout the interior space and to distinguish between the new and historic steel and wood elements in the building.

As part of the preservation effort, approximately 80 percent of the existing wood windows were retained and repaired. A central feature of the old brewery — a vertical wooden grain elevator which carried malt to the iconic, 140-foot-tall central tower on the roof — was incorporated into the new design, visible now through a Plexiglas encasement. 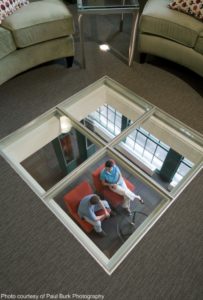 An interesting — and fortuitously accidental — discovery of a 1890s lithograph during excavation revealed the original color of the metal roofing to be a yellow-buff color, not the dark green it had become after a century of exposure. The original color was restored, and along with the repair or replacement of thousands of slate shingles, the roof now appears as it did when Wiessner first built it.

Stewart recently took a tour of the neighborhood late last year and surveyed the change to the landscape brought on by the restoration. “The surrounding neighborhood has a long way to go to remake its image” she notes. “But with the rehabilitated American Brewery building now a reality, anything seems possible. Here the catalytic potential of preservation-based development is on full display.”

A Persistent and Diligent Team Restores an Iconic Building and, Ultimately, a Community Destination