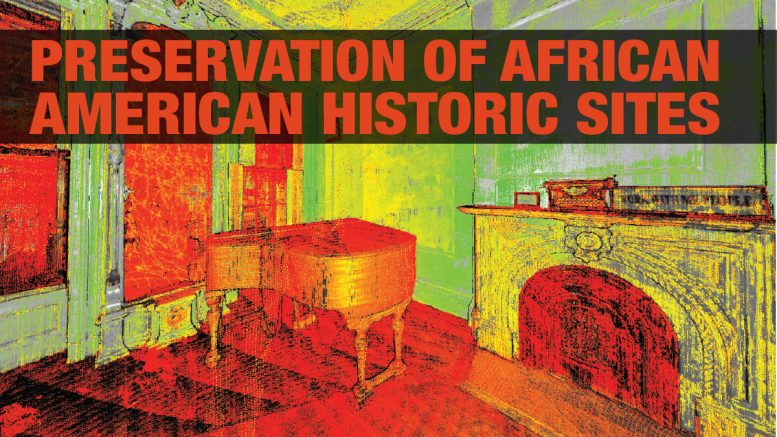 Armed with the rich data generated by cutting-edge 3D laser scanning technology and supported by the coaching of expert preservationists, three architectural students collaborated remotely to earn a spot in the Library of Congress by documenting the historic New York City home of a prominent figure in African American cultural history.

With support from Capital One, the National Park Service and the African American Cultural Heritage Action Fund, the students, all of whom attend historically Black colleges and universities, virtually participated this summer in an intensive Digital Documentation Fellowship presented by the National Trust for Historic Preservation (NTHP); Existing Conditions, which comprehensively documents buildings with laser scanning and BIM; and the National Park Service’s Historic American Buildings Survey (HABS).

Point cloud data accumulated by Existing Conditions during a comprehensive scan of the interior and exterior of the historic brownstone played a key role in the virtual, six-week fellowship in which the students networked with preservationists, learned historic preservation fundamentals, and applied documentation standards set by HABS and the Secretary of the Interior to create and submit an entry for the 2021 Leicester B. Holland Prize.

“You can think of us as the eyes in the field for architects, owners, preservationists and many more professionals,” says Existing Conditions President Jared Curtis. “We create a digital version of the built environment and from there deliver any type of drawing, model, or dataset that the client requires to add value and reduce risk in their work.”

The unique educational experience originated from a meeting between Curtis and Brent Leggs, executive director of NTHP’s African American Cultural Heritage Action Fund, to discuss ways that Existing Conditions could help the National Trust. From there, NTHP invited the company to become a pro bono partner in an effort by NTHP and MASS Design Group to create a visioning report that will guide the future of the 4-story building, which cannot be identified due to privacy restrictions.

The location is one of more than 150 historic sites in which the African American Cultural Heritage Action Fund has invested to “showcase the full contributions of African Americans to our nation and to harness the power of preservation as a tool for equity and racial justice,” Leggs remarks.

“It was a real learning opportunity for me,” explains Chavon Simmons, 31, a student at Hampton University, Hampton, Va. “What I found most interesting was that I was able to create drawings of a building that I have never seen or stepped into and I was able to produce drawings of a caliber as if I was there.”

She notes that digital capture technology has the potential to make historic structures more accessible to the handicapped, as well as to recreate historic buildings in their entirety in the event of an accidental loss or natural disaster.

Ed Cafasso is the owner of Bending Light Communications, a public relations consultancy whose clients include companies in the real-estate-development and -management fields.

Be the first to comment on "Architecture Students Complete a Historic Preservation Fellowship, Using Digital Technology to Study an African American Site"