Built in 1903, the Audrain Building features 18-foot-tall by 12-foot-wide arched windows in a red-brick façade complemented by a polychromed terracotta roofline and accents.

It’s no wonder Newport, R.I., often is found on lists of the best places to visit in the U.S. Known as the sailing capital of the world, Newport’s sparkling waters and magnificent shorelines are only part of the city’s appeal. During the Gilded Age (a time that describes the economic boom after the Civil War until about 1900), some of America’s wealthiest families—the Astors, Dukes, Vanderbilts and Wideners to name a few—flocked to Newport to build summer “cottages”, like The Breakers, the Vanderbilts’ 70-room, 125,339-gross-square-foot home.

Exquisite architecture wasn’t restricted to the residential buildings in Newport, however. The city’s Bellevue Avenue includes an architecturally significant block consisting of four Gilded Age commercial structures. Three of the historic buildings are adjoining—the Travers Building (1876) designed by Richard Morris Hunt; Newport Casino (1881) designed by McKim, Mead and White; and King Block (1892-93) designed by Perkins and Betton. The fourth building, the Audrain Building, which was built for French antiques dealer Adolf Audrain, was designed by Bruce Price and inspired by the Florentine Renaissance. Constructed in 1903, the 2-story building features 18-foot-tall by 12-foot-wide arched windows in a red-brick façade complemented by a polychromed terracotta roofline and accents. Price designed the first floor to host six retail shops while the second story would house 11 offices.

As the years passed, the first floor eventually became medical offices while the upstairs accommodated a number of commercial tenants. Ultimately, the bland interior did little to recall the building’s high-brow beginnings. In 2014, John Grosvenor, AIA, NCARB, principal of Northeast Collaborative Architects (NCA), Newport, and his team were chosen to rehabilitate the Audrain Building for AR Global, a New York-based real-estate investment company. Several of the firm’s partners have homes in Newport and wanted a summer headquarters for their business. NCA, which was established in 1981, certainly appealed to the partners because about 55 percent of the architectural firm’s work is in adaptive reuse and historic preservation. “The Audrain Building is a historic building that is listed on the National Register,” Grosvenor remarks. “I know that our experience with historic landmark buildings played a significant role in their picking us.”

What the design team didn’t know when they signed the contract to complete the rehab in six months was that the owners would decide after work began to change the program: Only the upstairs would house offices; the first floor would become a non-profit automobile museum that would display rotating exhibitions of classic cars, borrowing from AR Global’s partners’ own collections and those of local collectors, as well as assembling the museum’s own collection of cars with interesting Newport history. The design team embraced the opportunity in this challenge and what began as a scheduling nightmare culminated in five design awards for NCA. 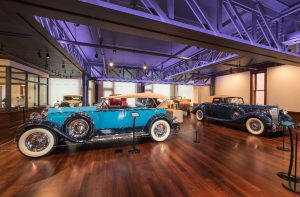 LED lighting showcases the columns and trusses of the building, as well as the cars.

During the Gilded Age, Newport was called the playground of the rich. Bellevue Avenue literally is the gateway to the stunning mansions for which the city is known. Today, the avenue experiences a high volume of traffic, which drew AR Global’s partners’ interest in the Audrain Building and made it the perfect location to showcase antique and classic cars. In fact, the building wasn’t for sale when the partners approached the previous owner.

“The partners were determined to get it,” Grosvenor notes. “It really caught their imagination in how it looked. It has all this terra cotta, all these jewel tones. And it’s very much a classical building in the sense of how it’s put together with a base and a very heavy cornice at the top and a shaft for the body. It’s just very different from any of the other stores along Bellevue, but it fits in as an urban design piece because it matches the height of the adjoining buildings on that one block.”

Grosvenor and his team wanted to do the building’s rehabilitation justice, so they researched its history and sought images and drawings of it. Unfortunately, they only found three images of the building in its original state. These images showcased a terra-cotta balustrade and lion sculptures perched at the roof line. The Great New England Hurricane of 1938 damaged these ornamentations and they were removed. Fortunately, Price had designed similar ornamentations on buildings, particularly in Philadelphia and, though the ornamentations weren’t identical, they served as a good reference for Price’s style. NCA ultimately created a competition for artists to recreate the original lions and balustrade. The competition was tirelessly managed by David de Muzio, executive director of what today is known as the Audrain Automobile Museum. Grosvenor is satisfied the winning reproductions are very close to the original.

Although AR Global was not interested in seeking historic tax credits, any alterations to the exterior of the building had to be approved by Newport’s Historic District Commission. Therefore, the change in program, which Grosvenor states occurred about halfway through the original sixmonth timeline, prompted the design team to return to the commission (and the city’s zoning board) with new proposals.

Grosvenor recalls the program change gave his team the opportunity to make the Audrain Building even more grand. When the building was constructed, a hotel existed on its south side, prompting Price to only make the west façade decorative. Today, a shopping center has replaced the hotel, allowing shoppers and passersby to see the entire south façade of the Audrain building, which was a simple, industrial brick. Among the additions to the south side are a new double-story window that matches the storefront windows on Bellevue. However, this new window opens to allow cars to enter and exit the museum gallery. The north and east façades remain unchanged; Newport Casino covers the north façade while a parking garage visually hides the east façade.

To protect the exhibits, the design team specified high-impact glass that is 1-inch thick for the storefronts. “We just didn’t want cars driving in and hurting the collection,” Grosvenor says. “There’s also absolutely no noise between the outside and inside.”

A challenge appeared when the construction team took apart the corners of the building. “We could see that all the brickwork was failing,” Grosvenor says. “That’s just because of the amount of window to structure. Normally, in cathedrals, you would have buttresses. We didn’t have the buttresses, so racking took place probably in big storms that caused the brick to crack and have structural problems in the corners. We were able to engage a steel ribbon on the inside when we took all the finishes down to hold the building together.”