Robinson Center is a 2,600-seat, historic WPA (Works Progress Administration) theater, built at the end of the Great Depression between 1937 and 1939. The historic venue, where Elvis Presley’s “Hound Dog” was recorded live for the first time, has served the Little Rock, Ark., community reliably for decades as a performing-arts center. It is currently undergoing a historic $65 million restoration effort as part of a major downtown revival. 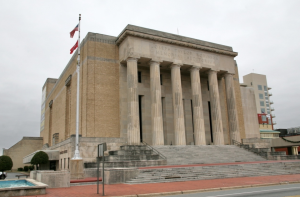 Robinson Center is a simple but functional old Art Deco public works monolith of a building.

In 2013, my firm—The BUILDING SURVEY Corp.—was engaged to produce existing conditions documents for the building, or, those parts of the building visible to the naked eye. Other consultants performed probing, mechanical, structural and utility work and likely used our plans, sections and elevations as the background for their work.

Located in Little Rock’s Historic District, the building acts as an anchor on one end of the lovely tree-lined West Markham Street, which is full of well-preserved historic buildings, culminating at the other end with the William J. Clinton Presidential Center. The Clinton Presidential Center was designed by Polk Stanley Wilcox Architects of Little Rock, partnered with Ennead architects, the same partnership responsible for the current renovations and additions to Robinson Center.

Robinson Center is a simple but functional old Art Deco public works monolith of a building. Built long before modern accessibility laws, it was later connected to the adjacent DoubleTree hotel, underground parking and the Arkansas River to the north, creating a spaghetti bowl of circulation and level-changes throughout the complex. The original 75-year-old structure is steel-framed inside a masonry shell with a quirky skip-stop stair that made it hard to know what level you were on, or where your seat was for that matter. 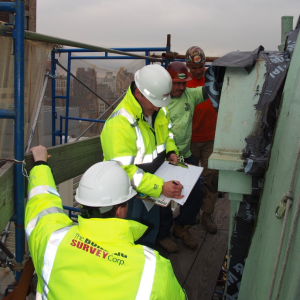 We produced drawings using a combination of legacy AutoCAD software and Revit. The survey work was actually performed “old school,” meaning a two-person crew, working with handheld laser distance finders and large clipboards, drawing and correcting the plans and shooting thousands of dimensions a day for two straight days. Another half of a day was spent shooting a couple thousand high-resolution digital photos of the entire structure, inside and out, for the historic record and construction reference.

Our scaled existing conditions drawings were imported into a 3-D Revit model so the architects could study the viability of retaining some or all of the existing interior of the building and to study various circulation and egress solutions. Sustainable design was an essential factor in this project by Polk Stanley Wilcox and Ennead, and in the end they wound up gutting the entire interior to make way for a more modern, efficient and elegant design, making better use of the existing volume. Historic preservation was also important, saving the historic exterior of the structure with restoration and some additions built on the north and west sides of the building. The center is expected to reopen as a LEED Certified structure.

Surveyors usually show up at an old building we’ve never set foot in and, within a day or so, capture thousands of bits of data and information about the building and understand it inside and out—perhaps better than most people who’ve ever entered it, even those who work in it. By the end of a survey, you feel like a doctor who just examined an old patient. All the vital statistics, measurements and physical conditions have been documented. You’ve checked the plumbing, ventilation and the heartbeat. You develop a “relationship” with your subject. 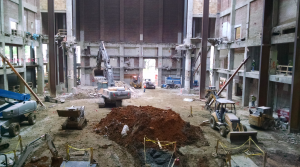 Sustainable design was an essential factor so the architects decided to gut the entire interior to make way for a more modern, efficient and elegant design while making better use of the existing volume.

Building surveying is really building “investigating”. Although our objective is to document the architectural structure via drawings and 3-D models, we also see many interesting architectural elements, historic construction methods, exotic materials, forgotten spaces and even a few unexpected surprises on just about every job. Robinson Center was no different.

It has been more than two years since we finished our work, packed up our gear, got on a plane and left Little Rock and Robinson Center behind. Her old self now stripped clean, awaiting a new set of clothes to dazzle her audience once again in her “Second Act”. Construction is in full swing and grand reopening festivities are planned for September 2016. Then, she will be a true Southern Belle in all her glory.

USGBC Announces Its Top 10 Countries and Regions for LEED

The Time Is Now for Organizations to Embed ESG Policies

Be the first to comment on "Behind the Building Survey Scene: Measuring Robinson Center for the Performing Arts"