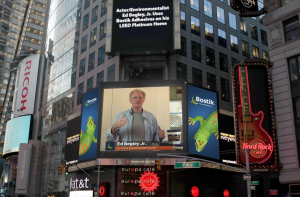 Bostik Inc., a manufacturer of adhesives and sealants, launched a national press program featuring a video of actor/environmentalist Ed Begley Jr. In it, Ed talks about the overall construction of his LEED Platinum home and why Bostik’s Ultra-Set SingleStep2 was an ideal choice for this very green project.

The release appeared on hundreds of media outlets, both consumer and trade, print and online. It also could be seen on a huge, 20-story digital sign in the center of Times Square, which is viewed by nearly two million people each day.

Michael Jenkins, business director for Bostik’s Consumer and Construction Business Unit – Americas, states: “Bostik high-performance adhesives are being successfully used worldwide for a diverse variety of applications dependent upon products people utilize daily. Globalizing the distinct image of our brand is a good ‘step one’ in getting everyday people to become even more familiar with the Bostik name and range of solutions our company provides. Times Square, being one of the most focal locations in the entire world, was an ideal venue for this recent message to appear.”

Scott Banda, director of marketing for Bostik’s Consumer and Construction Business Unit – Americas, adds: “The Green Movement in America keeps growing and growing. And Ed Begley Jr. is just as well-known for his positive environmental initiatives as he is for being an incredibly talented and successful actor. We’re delighted with the strong response to this release … and are planning to do more with Ed moving forward. People should stay tuned for that.”

In the past few months, other Bostik global image-building programs have included the promotion of the “Bostik Airplane,” a sleek, Boeing 737-800 flying four times per day to 47 destinations across 20 countries. And, Bostik was also a major sponsor of the 102nd Tour de France, which began on July 4 in Utrecht, Netherlands, and finished on the world-famous Champs-Élysées in Paris on July 26.

Ultra-Set SingleStep2 is a high-performance adhesive, moisture control and sound-reduction membrane all in one. Bostik’s breakthrough AXIOS Tri-Linking Polymer Technology used in this formulation maintains the superior long-term durability, moisture control and sound-abatement properties of high-end urethane adhesives. However, it is easier to spread and clean off of prefinished flooring before and after cure. This adhesive contains 1 percent recycled rubber material, has zero VOC’s and does NOT contain any water.

Be the first to comment on "Bostik and Ed Begley Jr. Featured on Digital Sign in Times Square"