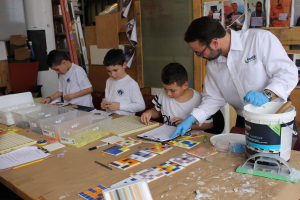 Bostik Inc., a manufacturer of adhesives and sealants, joined up with its strategic partner Artaic Innovative Mosaic, to host 15 elementary students.

Bostik Inc., a manufacturer of adhesives and sealants, joined up with its strategic partner Artaic Innovative Mosaic, to host 15 elementary students from the Eliot K-8 Innovation School. The event took place at Artaic’s facility in Boston for a hands-on, learning experience focusing on the art of mosaic tile.

The afternoon’s lesson plan included three individual “stations” where students learned about Artaic’s cutting-edge robotic technologies, which have been developed to design and fabricate custom mosaic tile productions from concept through completion.

First stop was the Computer Software Station where students learned about digital converting of an image into a finished mosaic. Artaic’s personnel answered questions from the students and demonstrated how easily the computer can pixilate any image and prepare it for robotic mosaic fabrication. They watched on a large monitor as Artaic personnel took a simply drawn image and quickly had it rendered into a mosaic design using a custom-engineered CAD.

With clipboards, questionnaires in hand and safety goggles in place, the enthusiastic students were then taken to see the actual mosaic robots in action. This is where they met “Arty”, one of the robots responsible for “planting” the tiny tiles into to make up the mosaics. Arty’s “human monitor” showed the kids the ins and outs of the robot, and exactly what was needed to keep Arty working properly. The goal here was for students to understand how robots and humans can actually work collaboratively to create a mosaic. They asked questions about the components of the robot, how fast the robot worked and one student even inquired, “Does the Robot ever get tired?”

The next stop was the actual hands-on creating of a mosaic. Prior to their visit, the students had created their own original mosaic design on paper in a “color by number” pattern. They were given individual grids, bins of numbered colored glass tiles and then, were timed on how quickly they could assemble a 5 by 5 mosaic tile design. Because the students had just witnessed how quickly “Arty” could assemble the tile; now they compared that to their time to his. Lesson learned: “Arty” is much faster and precise than humans.

Final step: grouting their mosaics. Scott Banda, Bostik’s director of Marketing, Consumer & Construction Business Unit, took the students through each step of grouting and installation of the mosaics. He patiently introduced them to the tools and materials of the trade as Banda demonstrated proper grout application technique. Using Bostik’s Dimension, a patented, glass filled, ready-to-use, water based, urethane grout, Banda had the opportunity to touch on recycling, as the material he was using was made from recycled glass.

Banda was quite adamant as he reviewed safety precautions taken in working with chemicals. The students listened intently, watching him fill the grout joint, which when Dimension is specified, the grout brings out the beauty of all the glass tiles. Banda discussed the importance of this last and final step of creating the mosaic. The grout used was a fast-setting material so the students would be able to take their masterpieces home to their parents the very next day.

After the students left, Banda had his own reflection in working with the students and stated: “They watched everything so intently and with so much curiosity, it makes me believe that we may have, in some way, made an impact today. Even if it were just one student, it’s important to remember that these young people are the future. At Bostik, we believe that in order to keep our industry moving forward, it’s important to not only promote technology but to make a concentrated emphasis on the importance of tradesmen and their mastered skills.”

“These students are the future of our industry and the key to keeping our nation’s infrastructure intact. Promoting not only products, but also the skilled manual labor needed is imperative,” Banda continued.

Bostik and Artaic’s ultimate goal is to offer this learning program to many more students in the Boston area and have all intentions to make this a national program in the future.

Jaya Banda, daughter of Bostik’s Scott Banda, who is a student at the Eliot School, states: “My dad actually did a great job. I used to think what he did was about as exciting as watching paint dry. But now, I think it has a lot more energy than that!”

Bostik and Artaic will be teaming up again, this time at Coverings 2016 in Chicago.