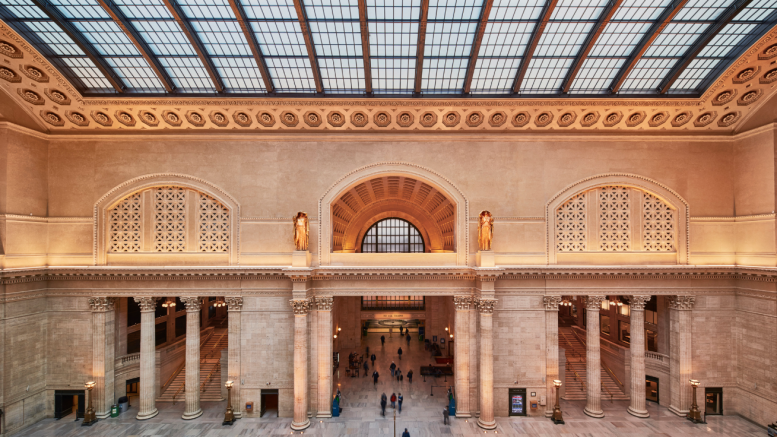 Chicago Union Station became a designated landmark in 2002 and was listed by AIA Illinois as one of 200 Illinois Great Places. Designed by noted architecture firm Graham, Anderson, Probst & White and completed in 1925, Chicago Union Station had numerous structural maintenance challenges. For decades, the station’s expansive skylight presented inherent water infiltration and drainage challenges. Previous patch repairs altered the appearance and decreased the amount of natural light in the space.

Chicago-based Goettsch Partners was hired to investigate and assess the existing conditions and design and construct a new watertight skylight over the original system while also fully restoring deteriorated finishes. In addition, the project team’s renovation work at Chicago Union Station sought to maximize the reuse of existing materials and infrastructure, preserve the historic integrity and investments made by prior generations, and significantly reduce energy consumption.

AFTER PHOTOS: Amtrak; BEFORE and RESTORATION PHOTOS: Goettsch Partners

The station’s ornate Beaux-Arts main waiting room, the Great Hall, is one of the most historic and memorable public spaces in the U.S. with its 219-foot-long vaulted skylight and connecting lobbies and stairwells. In the 1920s, technology in the Great Hall’s 18,000-square- foot skylight was pushed beyond its technical capacity. Over time, extensive deterioration and leaks developed in the original skylight, and plasterwork and painting showed signs of decay, including two figural sculptures by noted artist Henry Hering.

While the restoration work was taking place on the upper portions of the Great Hall and skylight, approximately 130,000 Metra and Amtrak daily commuters passed through the grand public space directly below. A creative team of logistics and scaffold experts devised innovative solutions to achieve the desired repairs with minimal disruption below. The team created a unique 24,000-square-foot work deck hung from the skylight girders to facilitate the installation of the new skylight, restore the historic skylight, and restore the magnificent ornamental plaster and historic lighting. The team eliminated the use of scaffolding that would have taken up valuable space on the floor.

Early planning, developed utilizing 3D models, was key to this project’s success. Meticulous attention to detail was paid to every element, both exterior and interior, with extensive quality-control programs to uphold the standards of excellence established by the project team. The project presented many unique challenges, including replicating the historic finishes, original plaster details and glazing; repairs to the travertine utilizing salvaged original elements from previous repair projects; replacement of 2,052 pieces of glass for the existing skylight; and the addition of the new skylight consisting of 858 new panes of clear, high-efficiency glass, positioned 5-feet above the historic skylight.

The energy analysis evaluated the potential impact of the addition of a new skylight structure in conjunction with the existing skylight. The analysis consisted of building a 3D model of the existing Great Hall conditions, including the performance parameters of the envelope, the internal gains, and the HVAC system and using it as the baseline for simulating different design scenarios. The variables that were investigated were the annual heating energy, space temperature of the volume between the existing skylight replacement and the new skylight structure, and the solar heat gain into the Great Hall.

The annual heating energy results for the entire Great Hall showed a 13 percent savings with the combination of replacing the existing monolithic skylight with double glazing. Another added benefit of the combination of the new glazing, girder caps and new skylight structure is a reduction in solar heat gain of up to 29 percent annually, which resulted in a reduction in cooling-load demand. The final variable that was tested was the heat conduction at the new skylight; the results showed a 67 percent savings in heat conduction because of the improvements in thermal resistance and the reduction in outdoor air infiltration.

Pre-existing lighting was a mix of historic 1920s incandescent fixtures with some upgrades and early 2000s induction fixtures surface-mounted on the top of the Great Hall cornices. The added induction fixture locations were not historically appropriate, and fixtures were not controlled. Historic fixtures were restored, rewired and upgraded to dimmable LED, and the surface-mounted cornice lights were replaced by asymmetrical reflector LED fixtures mounted within the cove. A control system was connected to a dimming day/night scene selection with daylight-sensor controls to reduce the lighting intensity when appropriate, achieving an overall 60 percent reduction in wattage from 1.9 watts per square foot to 0.76 watts per square foot.

With completion of the project, the original skylight has been restored and is protected by the addition of a modern exterior skylight that eliminates water leakage and reduces maintenance and ongoing operational costs. The interior finishes were meticulously restored to their original appearance, breathing life back into the historic Great Hall. Following the completion of the full 42-month restoration, the thousands of passengers that pass through the nation’s third-busiest metropolitan transportation station daily can once again experience the beauty of the space as it was originally intended.

Behind the Scenes: The 2021 Metamorphosis Awards Judges Were Previous Winners