The duct-cleaning contractor recommended that the air handlers and ductwork be sealed with Carlisle’s RE-500 sealant. 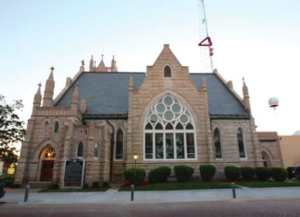 The Kountze Memorial Lutheran Church building in Omaha, Neb., has an unusually rich history; preserving that history is a top priority for the church’s members. The congregation was founded in 1858, and the magnificent white limestone German Gothic building dates back to 1906. The 62,000-square-foot, multilevel building, which occupies an entire city block, boasts an equally impressive interior, including stained glass, paintings and aged woods. A centerpiece of the church’s beautiful sanctuary is the three-rank Aeolian-Skinner organ, installed in 1950 as a memorial honoring Kountze’s members who served in World War II.

Extensive Renovations in Past Decade

Because these treasures must be carefully protected and preserved, Kountze Memorial Lutheran Church has undertaken numerous renovation projects at a total cost of approximately $10 million in the past decade, according to Kountze’s building superintendent John Bogue.

Because poor indoor air quality can have adverse effects on paint, wood, stained glass and the components of the organ, maintaining the church’s air duct system was a primary concern. Dust and high humidity can have deleterious effects on an organ, potentially causing some of the instrument’s pipes to become stuck open, requiring labor-intensive and time-consuming repairs. To protect their investments, as well as preserve the church building’s distinctive and historical features, Kountze Memorial Lutheran Church needed to keep the building’s indoor air as free of excessive humidity and airborne dust as possible. 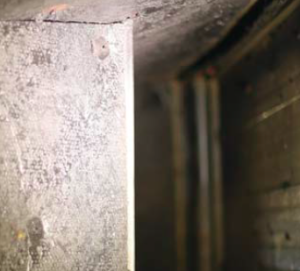 To protect their investments, as well as preserve the church building’s distinctive and historical features, Kountze Memorial Lutheran Church needed to keep the building’s indoor air as free of excessive humidity and airborne dust as possible.

In the spring of 2014, Kountze Memorial Lutheran Church undertook a $1.4 million organ renovation, concurrent with electrical, plumbing and air system renovations. Bogue notes that prior to the air system renovation, “humidity was a significant problem,” and also cites “visibility issues” asserting “some things were not as clean as they should be.” After completion of the job, Bogue expresses great satisfaction with the results of the church’s air system overhaul. He states, ”The indoor air quality has improved tremendously and the costs of operating the system and maintaining the building at the correct temperatures and comfort levels have [been] reduced substantially.”

Significant problems arise as ductwork ages. Additionally, the fiberglass becomes friable and strands enter the air stream and, eventually, into the occupied spaces. This makes cleaning even more difficult as the duct work as the ductwork and air handler insulation gets compacted with dirt and debris.

Because keeping the church’s air system performing optimally was of primary concern, Kountze Memorial Lutheran Church called on Midlands Duct Cleaning of Omaha to inspect and clean the church’s air ducts and air handlers. The project’s supervisor, Midlands’ owner Larry Kuehn, determined that the church’s seven air handlers needed cleaning and some of the ductwork should be replaced.

The Right Sealant for the Job 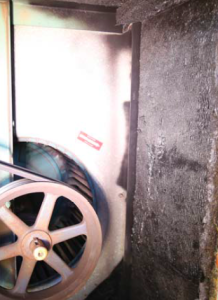 The duct-cleaning contractor recommended that the air handlers and ductwork be sealed with Carlisle’s RE-500 sealant.

Kuehn further recommended that the air handlers and ductwork be sealed with Carlisle’s RE-500 sealant, noting that some of the air handlers were “in pretty rough shape,” and required some “tender loving care.” Applied quickly and easily with an airless sprayer, RE-500 helps improve indoor air quality by keeping fiberglass particles from ductwork insulation out of the airstream.

High-performing RE-500 was the ideal sealant for this job for a number of reasons. Because of its low-VOC content, quick application and minimal drying time, its application would interfere minimally, if at all, with the other renovations that were taking place alongside the overhaul of the air duct system.

Kuehn was astounded by how quickly the renovations were completed with the help of RE-500. “What was supposed to be a month-long project was completed in only three weeks, thanks to RE-500’s easy application, minimal drying time and no-hassle clean-up,” he says.

Kuehn also notes that use of RE-500 is sure to make future cleaning of the ductwork and air handlers significantly easier. “After being sealed with RE-500, the building’s seven air handlers looked practically brand new,” Kuehn remarks. He adds that RE-500 has been a good product for his team and that its use has greatly increased his company’s ability to meet customers’ ductwork remediation needs. Kuehn adds that he is so satisfied with RE-500 that when he is called to do an inspection in advance of a potential job, he bids each job with sealed ductwork.

Overall, Kuehn contends that sealing lined ductwork with RE-500 is a “no-brainer.”

Indoor/Outdoor Joint Sealant Can Be Applied in Cold Weather