Belle taking a break during a summer walk.

I adopted a rescue dog last December. Belle has enriched my life in many ways, but I never thought she’d help me see the world I had been completely missing. Before I made two walks with her part of my daily ritual, I was always rushing in and out of buildings and my car, hating when it’s too hot or too cold outside, and ultimately overlooking the natural world around me. 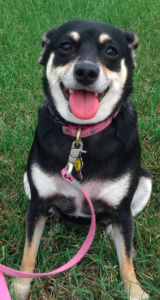 Belle taking a break during a summer walk.

Although a Chicago winter probably is not the optimal time to adopt a dog, I quickly saw the beauty in sparkling icicles hanging off tree limbs and big fluffy snowflakes falling around us. I loved our quiet morning walks with only the sound of my boots and Belle’s paws crunching in the snow. As spring approached, Belle and I were giddy about warmer days. This year, I didn’t just wake up one morning and notice trees suddenly had leaves; I actually saw the buds appear and slowly transform into leaves. I admired my neighbors’ yards, which were thoughtfully planted to ensure flowers bloomed from May through September. Yes, I actually stopped and smelled the roses—and lilacs.

Nature isn’t something I realized I had been missing. Now that I’ve been exposed to it again, I can’t stop thinking about how to bring more greenery into my life year round. The Pennsylvania Horticulture Society (PHS) hopes its annual pop-up gardens have a similar effect on Philadelphians. PHS’ mission is to create a sense of community through horticulture. Hoping to attract a younger crowd to its pop-up gardens, this year the organization incorporated food and drink, as well as lush greenery, in a vacant lot that will eventually be developed by the adjacent University of Arts. Nobody had expected the garden, which opened in May and closed in October, to be as successful as it was.

“We weren’t looking to market this in a major way; it was meant to be this kind of happenstance garden,” explains David Fierabend, principal of Groundswell Design Group LLC, Hopewell, N.J., the landscape architect on the project. “We threw it up on some blogs and The Philadelphia Inquirer wrote an article about it and after that, forget it. Everybody was just all over it.”

Food and drink certainly were big draws to the space, but it was the ambiance of LED lights strung through newly planted honey locust trees, lawn space and greenery that brought locals back again and again to sit in refurbished rocking chairs or relax on artistically stacked pallets. If you missed it this year, the collaborators already are planning to recreate the successful pop-up beer garden in the same location next year. Read more about the garden and other projects from Fierabend’s portfolio that make use of neglected or abandoned outdoor spaces.

As you’ll read in the article, Fierabend connected one of his previous clients with PHS, which ultimately helped introduce food and drink to the pop-up garden, appealing to a wider variety of people. Years ago, when I was editing a green-building magazine, communication and idea sharing, like this, were themes in every issue. The thought was an integrated design and construction process—in which all stakeholders were involved from day one—created efficiencies and better buildings. This isn’t just the case in new-construction green buildings. Two articles in this issue underscore the importance of an integrated project delivery process for existing buildings.

In “Business”, William E. Holloway, AIA, LEED AP, shares how concealed architectural problems could have been more easily exposed through an integrated project delivery process. “If a construction professional can be brought into the project team early in the design process, every part of the team—owners, architects, consulting engineers and the construction entity—will be better off,” he says.

Similarly, Steve Easley writes in “Component”, that most existing buildings do not perform as well as they look on paper. “This is because the design and construction industry typically works in a hand-off-type environment, instead of following an integrated design process in which all team members contribute from the start,” he says. As such, Easley outlines how a one-time capital investment to improve an existing building’s thermal performance through insulation and air sealing should be the No. 1 priority during a major renovation.

As another year comes to a close and you’re pondering New Year’s resolutions for 2014, consider being more communicative, reconnecting with nature and adopting a shelter dog. This issue of retrofit provides the encouragement for each.

Insulation Product Is Certified as Asthma and Allergy Friendly

Be the first to comment on "Communication Is Key"