When the Metro Toronto Convention Centre (MTCC) decided to renovate its South Building, it sought replacement ceiling panels that offered a modern look and modern performance, and would support its pursuit of LEED certification, a rigorous and internationally recognized certification from Canadian Green Building Council. With ROCKFON, it found a solution that would uplift its architectural vision and uphold its design requirements. 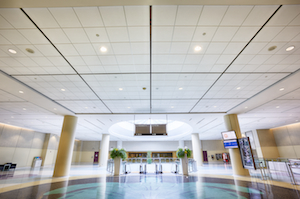 The Metro Toronto Convention Centre sought replacement ceiling panels that offered a modern look and modern performance, and would support its pursuit of LEED certification.

Located at 222 Bremner Boulevard in downtown Toronto, the 1.2 million-square-foot MTCC South Building was designed by B+H Architects and opened in 1997. After 16 years, the space was in need of an update and the ceiling panels had begun to show their age. Addressing the convention center’s essential performance and sustainability goals, ROCKFON worked closely with key facility staff of MTCC.

“We have had a sustainable procurement policy in place since 2008, which guides us in all purchasing practices,” says Jaikaran. “Choosing products that have recycled content and low/no-VOCs is important to the convention center.” Rockfon Koral ceiling panels have earned UL Environment’s GREENGUARD Gold Certification and contain up to 34 percent recycled content. ROCKFON ceiling panels are made of water-resistant stone wool, an inorganic material that does not promote growth of mold or bacteria. 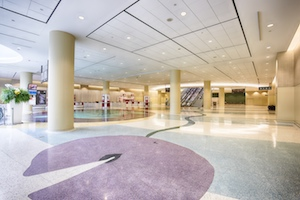 Excellent sound absorption was another of the MTCC’s performance criteria. Rockfon Koral carries UL Classification for three acoustical categories. For MTCC, high sound absorption was most important, which is measured as a Noise Reduction Coefficient (NRC) of 0.85. “Since we are Canada’s largest convention centre, many of our events can be quite large,” says Jaikaran. “We need to contain noise and provide acoustic privacy, rather than having sound penetrate the plenum and carry to adjacent spaces.”

ROCKFON’s district manager for Ontario and western Canada, Scott Debenham, adds, “Rockfon Koral’s high NRC mitigates what’s known as the ‘cocktail party effect.’ When a large group of people gathers in an open space, they escalate the volume of their voices, competing to hear one another. This makes increasingly difficult to hear the individual conversations taking place. Our ceiling panels’ high sound absorption makes it easier to hear one another without raising your voice, as well as enhances speech intelligibility to hear a speaker addressing the large group.” 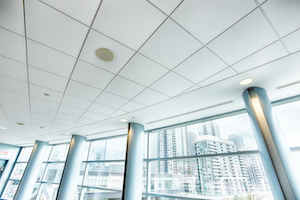 For MTCC, high sound absorption was most important, which is measured as a Noise Reduction Coefficient (NRC) of 0.85.

As part of creating comfortable, healthy spaces that respect the environment, minimizing repair and maximizing longevity are key considerations in any sustainably designed project. With renovation projects, there is a direct opportunity for comparison and improvement. Jaikaran explains that MTCC’s “old tiles were brittle, dirty, broken on some edges” and showed signs of water damage and stains.

Rockfon Koral reflects 86 percent of light from the panel’s surface to the building’s interior, contributing to LEED criteria for energy efficiency. Jaikaran elaborates, “Having a white ceiling tile with a smooth surface and high light reflectance brightens up the space, which could potentially mean energy savings, light reduction and a cooler space.”

Prior to replacing the old ceiling panels, MTCC’s renovation project team gathered several samples to conduct their own practical experiments regarding cleaning and durability. ROCKFON’s products successfully passed MTCC’s tests. The stone wool panels also can withstand temperatures up to 2150 F. It does not contribute to the development and spread of fire, giving occupants the extra minutes they may need to escape a fire. 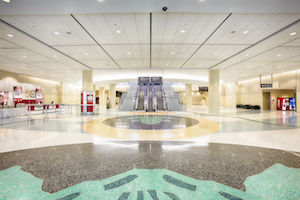 Rockfon Koral reflects 86 percent of light from the panel’s surface to the building’s interior, contributing to LEED criteria for energy efficiency.

Even when applied in infrequently heated and unheated rooms, or at high-humidity levels, these panels retain their intended performance. No acclimatization is needed, which means ROCKFON ceiling panels can be installed during the very early stage of the build (when windows are not fully sealed) without any risk of deflection of the panels. Assisting with a smooth installation, Jaikaran says: “The ceiling tiles are easy to cut. The workers find them easy to work with.”

“It’s gone well,” agrees Ralph Scali, Showtech Power & Lighting’s manager. Showtech installed more than 40,600 square feet of Rockfon Koral products in the prefunction areas of the South Building. As MTCC’s in-house partner, Showtech scheduled the facility improvements during a three-month period with activity occurring between the convention center’s events to avoid disrupting the clients and visitors. Completed in January 2014, Scali says: “It makes a huge difference once the new tiles are in. It certainly brightens it up.”

Pleased with MTCC South Building renovation’s ceiling installation and its resulting aesthetic, performance and sustainability qualities, Jaikaran proudly describes the convention center as offering: “Top-of-class service in a first-class venue in a world-class city. And yes, it’s the only facility that has hosted both a G20 and a G7 Summit,” as well as Toronto Construction Association’s Construct Canada, Canada Green Building Council’s national conference and the U.S. Green Building Council’s Greenbuild.