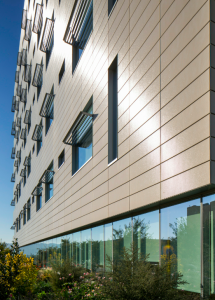 Glazing terracotta isn’t new but many terracotta suppliers rely on third-party providers, particularly for any sophisticated or specialty glazes. When Argeton was acquired by Wienerberger—the world’s largest producer of bricks—Argeton benefited from Wienerberger’s glazing expertise, which has significantly enhanced its ability to produce custom colors and glazes in a wide array of architectural options.

This innovative glazing was initially created for the terracotta façade of Randall Children’s Hospital in Portland, Ore. The architect, ZGF, was looking for a way for the tiles to come alive in the sunlight as it moved across the building. The effect is the changing of the color of the wall from morning to afternoon and evening—spring to fall.

Telling’s custom glazing actually improves the performance of the tiles. While they have the same life expectancy and weather resistance as the natural version, the glaze reduces the surface porosity of the tile, thereby increasing resistance to atmospheric pollution and enabling the removal of graffiti without harm to the tile. Tiles stay cleaner and look better for longer periods of time. Glazes are fired and permanent. Standard glaze finishes come in matte, medium and high gloss.

Argeton, a subsidiary of the Wienerberger Corp., is the original and oldest manufacturer of terracotta rainscreen systems. Developed in Germany more than 20 years ago, Argeton has been successfully installed on thousands of projects in more than 29 countries. The Argeton system is fully engineered and tested to meet the building criterion for new construction and retrofit in the United States and around the world. Telling Architectural Systems LLC is the exclusive North American marketer and supplier of Argeton.