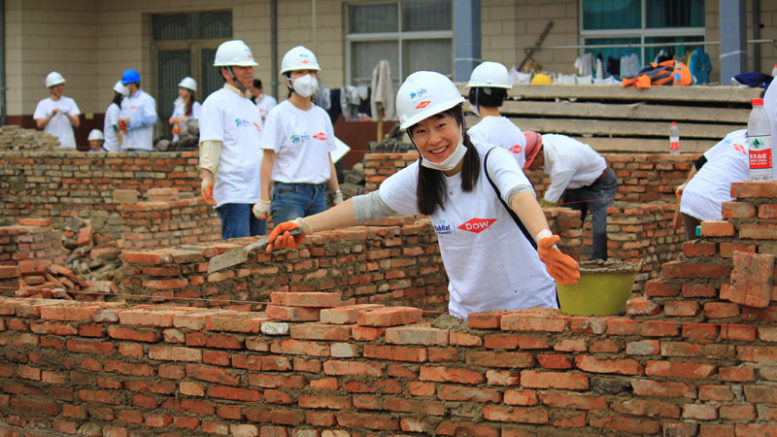 For 30 years, Dow employees have built in partnership with Habitat for Humanity around the world, including China in 2012. 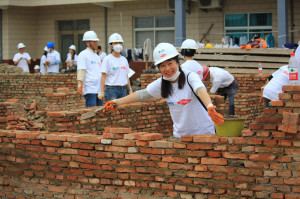 For 30 years, Dow employees have built in partnership with Habitat for Humanity around the world, including China in 2012.

The Dow Chemical Co. has announced its commitment to Habitat for Humanity International, which marks the company’s 30th anniversary of financial, volunteer and product contributions to Habitat to support the goal of creating safe, affordable housing in partnership with low-income families around the world.

Dow was one of Habitat’s first corporate partners, and during its three-plus decades has been instrumental in the construction of nearly 39,000 homes in 24 countries on six continents, including in Ghana, Africa, for the first time in 2013.

“Dow and Habitat understand the importance of providing safe, affordable housing and giving families that much needed hand up toward a better future,” says Bo Miller, global director for Corporate Citizenship at Dow. “Our 30-year partnership illustrates this commitment and passion for improving lives, and we are proud that our efforts are truly making a difference.”

“We are so grateful to Dow for reaching out to Habitat to become one of our first national corporate partners and for helping to build thousands of homes during the last 30 years,” says Jonathan Reckford, CEO of Habitat for Humanity International. “I have had the privilege of working with Dow associates all over the world and so appreciate the contributions both of the organization and the individual supporters. Dow helped us create the model for developing crucial corporate partnerships and has been pivotal in helping us building homes, communities and hope.”

Dow and Habitat share a goal to develop communities by building, repairing and rehabilitating houses. Dow’s partnership with Habitat focuses on finding creative ways to leverage its products, experience in energy efficiency and conservation, and people to have a positive impact on the need for affordable housing. Dow also works with Habitat by providing personnel who serve as board members at the local and international levels.

Dow engages a holistic approach with Habitat, contributing not only funds and energy-saving insulation products, but significant volunteer support that is needed to bring construction projects and the homeowners’ dreams to life. This approach aligns with a number of Dow’s 2015 Sustainability Goals, including those related to energy efficiency, community success and local protection of human health and the environment.

As part of its anniversary commitment, Dow volunteers are helping to build homes in 30 communities and the company has pledged more than $1.3 million in funding. Additionally, Dow anticipates gift-in-kind contributions of STYROFOAM brand insulation products of $4 million. To date, Dow has contributed $56.9 million in cumulative giving to Habitat.