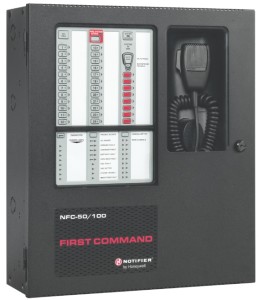 The Notifier by Honeywell is an emergency alert system that interfaces with any commercial fire alarm system.

Notifier by Honeywell has released its FirstCommand emergency communication system that interfaces with any commercial fire-alarm system to provide a system for broadcasting live and pre-recorded messages and alerts. The scalable-design allows the system to be tailored for one building while offering the capability for future expansion. It can support up to eight remote control panels and microphone consoles. Fourteen pre-recorded messages up to one-minute long can be programmed. The system also can be used for non-emergency functions.

Fire and Carbon Monoxide Detection in One Unit

Be the first to comment on "Emergency Alert System Is Scalable"