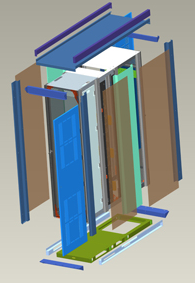 A QR Code on the IBC seismic label affixed to the enclosure provides quick access to the Certificate of Compliance via a smart phone or other Web-enabled handheld device. Referencing actual documents eliminates frequent confusion about which specific IBC seismic requirements that non-structural equipment, such as power control systems, meet.

The documents are posted online, which shows ASCO Power Control Systems are the only paralleling switchgear certified to 2.46, the 2012 IBC maximum standard ground acceleration requirement. Revisions or other additional information will be posted to the site, which eliminates searching for hard-copy documents and wondering whether they are up to date.

Although most areas of the country do not experience extreme ground acceleration forces, facility managers, consulting engineers and contractors can be sure the new enclosure—and the gear inside it—will pass inspection for seismic requirements anywhere in the country and internationally. In fact, the certification qualifies the systems for rooftop installation even in Occupancy Category IV structures, those essential to the continued operation of designated facilities.

Seismic certification for the NEMA 3R enclosure follows certification of ASCO Power Control Systems in NEMA 1 enclosures. During those tests, the systems were “live” and operated throughout the simulated seismic event, even though IBC codes do not require such operation. For facilities required to have Critical Operations Power Systems by Article 708 of the National Electrical Code, such as hospitals, the ability of transfer controls and mechanisms to function during a seismic event could be literally life saving.

Test results are being submitted to California’s Office of Statewide Health Planning and Development (OSHPD) seeking certification to its standards. OSHPD maintains the most stringent seismic requirements in the country.

Seismic Separation Joint Clip for Use with Ceiling Suspension Systems