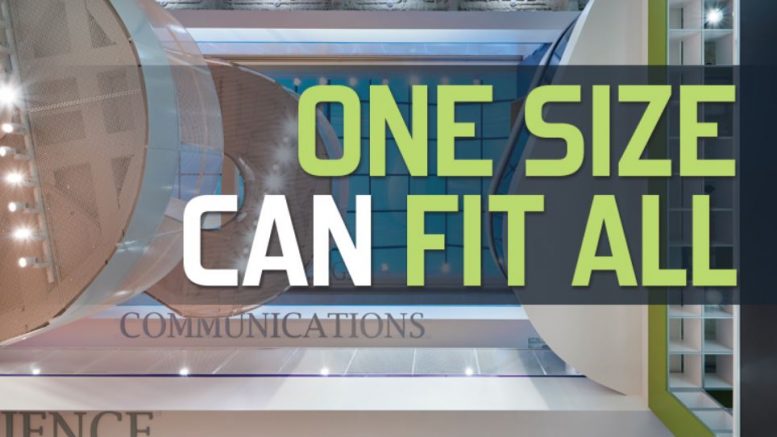 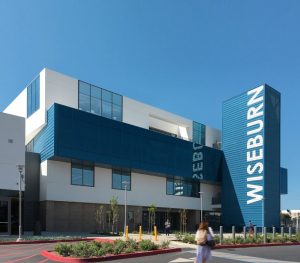 The district found an unlikely structure to renovate into one space for the three independent high schools: a 1981, 360,000-square-foot, 4-story office building on a 13-acre campus of utilitarian, industrial land. Last occupied in the 1990s by a high-security engineering lab that developed classified planes and weapons systems, the massive building’s perimeter was 300 feet on each side with a deep and dark interior. “It was not at all conducive to classrooms and educational space,” describes David Herjeczki, design principal in the Los Angeles office of Gensler. Gensler provided architecture and interior design on the project; Herjeczki directed the effort. “But this was a school district with a big dream and a limited budget. Despite the building’s challenges, we saw its potential,” Herjeczki says.

The building was intended to accommodate a total of 1,500 students from the three combined schools. Each Da Vinci high school has a particular focus: Da Vinci Science (science and engineering), Da Vinci Design (design, art and architecture) and Da Vinci Communication (media and content). 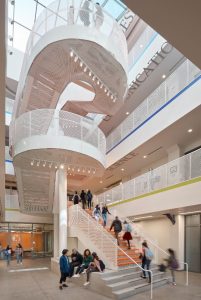 Gensler’s team began its design process by becoming acquainted with Da Vinci’s educational ideology. Through months of workshops, several prominent factors emerged. “Da Vinci is very innovative. Their 21st-century, project-based learning model shifts away from teacher-centric classrooms and personalizes education to meet students’ different learning styles,” Herjeczki explains. “We looked at designing spaces that are much more adaptable than typical classrooms, so teachers and students could constantly invent and reinvent their curriculum, which is a part of Da Vinci’s philosophical DNA.”

Transparency was another key component, so the building needed spaces that gave teens autonomy while providing teachers clear views into the spaces to intervene and guide students if needed.

Maintaining a compact set of 400 to 500 students in each high school helps Da Vinci staff know every student, which enhances its ability to personalize education and keep kids engaged. For Gensler, this meant creating learning spaces at varying sizes and scales to promote a variety of interactions. 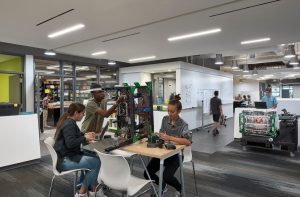 The building’s construction gave the design team a head start for its creative-space allocation. Typical of office developments, the walls were not load-bearing parts of the structure. Without the need to preserve pre-existing partitions, Gensler’s team could rethink the building’s parameters—inside and out.

“We embraced the industrial nature of the site to some extent, but we tried to humanize it a bit,” Herjeczki explains. “We demolished a big portion of the building so it’s no longer a monolith right up to the street, and we created a softer, articulated edge that brought the building closer to human scale.”

In all, the team strategically removed 116,000 square feet of exterior space and reduced the floor plates’ size to 52,000 square feet. Daylight is imperative for student wellbeing and enhanced learning, and the team cut an 80- by 40-foot atrium through the structure to bring natural light into the learning spaces and then added floor-to-ceiling perimeter windows.

Each of the three high schools has its own floor in the building and the atrium connects them by offering clear sightlines and an internal staircase for students to access their schools. Community space is on the ground floor of the atrium, as well as a multipurpose room that doubles as a black-box theater; dining area; and after-school program spaces, such as music rooms, performing-arts spaces and an arena for the science students’ robot competitions.

The emphasis on open spaces in the building presented acoustic issues, however. In the atrium, Herjeczki says spray-applied acoustically absorptive materials were the key to success. To provide visual transparency but still allow students to focus, the renovation uses thicker glazing than usual in the rooms.

MBMA and NAIMA Release a Guide on Acoustical Performance

Dividers Can Be Configured for Personal Separation and Sound Blocking