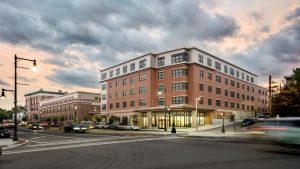 What’s the best way to redevelop a prominent site in the business district of a community that sorely needs housing options? In the case of the former St. Kevin’s Parish in Dorchester, Mass., the answer was the creation of a mixed-income residential campus called Uphams Crossing, a development integrating adaptive reuse and new construction into the uniquely landscaped existing parish grounds. With the creative financial stewardship of the Planning Office of Urban Affairs (POUA), safe and affordable housing has been delivered to the Upham’s Corner community.

Dorchester is one of Boston’s largest and most vibrant and diverse neighborhoods. But it also has a history as one of the city’s most distressed. More than 20 percent of its residents live near the poverty line, and it has one of the highest foreclosure rates in the area. The St. Kevin’s site in the heart of Dorchester’s business district, known as Upham’s Corner, presented an ideal location to create a mixed-income residential complex. POUA led an innovative project team that could address the housing issue through a creative vision for serving the Dorchester community.

The result is a mixed-income complex with 60 units of workforce housing for people who contribute to the local economy, such as teachers, technicians and service industry workers. Additionally, 20 units of permanent affordable housing were set aside for formerly homeless individuals or families. Supporting the residential units is a full-time onsite manager, as well as office space for St. Mary’s Center for Women and Children, an onsite provider of supportive services. A multi-use community room was designed to provide space for resident programs and hosting neighborhood community meetings. All of these services are centrally located in a spacious common area that also holds two resident lounges, an exercise room, computer learning center, bike storage and a central laundry.

The original school building, which also served as St. Kevin’s Church, is now home to 21 residential units. The entire team felt it was especially important to preserve this structure. With a strong and appealing street presence, and as the school where multiple generations of local children attended class, it has a prominent place in the community eye—literally and emotionally. The gut rehabilitation preserved the exterior walls and most of the interior structure while adding a third full story. Since the structure predated current seismic codes, shear walls were added to provide the lateral bracing needed to support the additional story. With a new code-compliant second stairwell and a four-stop elevator integrated into the structure, the former school building is now fully accessible.

Flanking the renovated former school, two new structures replace older ones that didn’t reflect the surroundings and were not easily adapted to residential use. Working with the renovated school building, the new apartment blocks address the complex scales of their urban surroundings. The greater density and entry into the site was placed on Columbia Road where it was most appropriate while the side streets required a more modest scale that better complements the smaller patterns of residential development. The new structures’ relationship to Upham’s Corner required a more civic gesture; here, the building corner was folded and a large projecting canopy frames the public community spaces with the building. In the space behind the three buildings, the St. Kevin’s campus’s parklike open grounds were preserved with access geared toward residents but available to the community at large, preserving an important civic space.

Uphams Crossing is within walking distance of convenient public transit with multiple city bus lines and the Upham’s Corner commuter rail. New housing here opens up numerous opportunities for residents, making it easier to engage with the commercial heart of Dorchester and bringing people closer to necessary services. At the project’s grand opening, Boston Mayor Marty Walsh described Uphams Crossing as “a place that serves a compassionate, valuedriven community. One of the great things about Boston,” he continued, “is it preserves its past and prepares for its future.” The project team couldn’t agree more.

CL3VER Announces New Pricing and Will Be Exhibiting at AIA Convention

Architectural Textile Product Affixes To Any Wall In Prefabricated Sheets

Be the first to comment on "Former Church Campus is Transformed as Supportive, Workforce Housing"