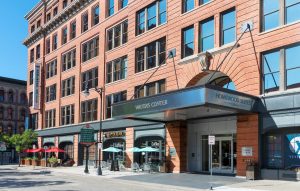 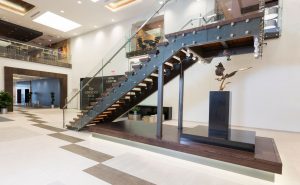 Originally one floor, the central entrance lobby was opened up to create a larger 2-story lobby with a grand staircase that connects to the hotel check-in and concierge.

Originally built in 1898, the building stands as a tribute to Grand Rapids’ rich legacy as “Furniture City”. With its central location and proximity to the Grand River, Grand Rapids was once a hotbed for the production of raw lumber and, eventually, more refined wood products, including furniture. The Waters Building was constructed in direct response to the growing volume of furniture manufacturers traveling to the area for exhibitions. At the time, it was the largest building in the world dedicated to furniture exposition. At 6 stories, the Waters Building had the capacity to display products from numerous manufacturers in one central location and quickly solidified Grand Rapids’ Furniture City status.

By the 1950s, the furniture industry had moved south because of Grand Rapids’ eventual deforestation, and the Waters Building entered its second era when it was converted into office space. In 2013, the building entered its third era when it was purchased by Edmark Development Co. and Visser Brothers Inc., both of Grand Rapids. By this point, the building had been suffering from low occupancy, and its new owners decided to reduce the office areas and use the space for other purposes. They sought to capitalize on the building’s central location in Grand Rapids’ business district to attract and retain tenants and renamed the building the Waters Center to signal the diversification of its amenities and occupants. Ghafari Associates was challenged with blending the existing character of the century-old building with contemporary amenities and details, striking a deliberate balance between old and new.

In total, the project involved the extensive transformation of 300,000 square feet of space. The renovated north tower houses office space and apartments that feature exposed brick and existing hardwood floors (many of which had been covered by new flooring materials over the years). The walls and floors were maintained to uphold some of the original character of the historic building. The loft-style apartment units include high-end features, such as quartz surfaces and walnut cabinetry, that contrast nicely with the original building structure. The units that do not face the street look out over the internal atrium, which provides all units with natural light (which was not previously the case with these internal spaces). The Ghafari Associates team also was involved in the design of several office spaces for tenants, including Baker Holtz, Goebel Insurance and Spectrum Health.

The south tower was renovated into a beautiful and contemporary Hilton Homewood Suites Hotel. Ghafari Associates provided architectural services for the hotel and interior design services in the core spaces of the building. Hilton selected Griffin, Ga.-based Innvision Hospitality to coordinate the hotel interiors, including the rooms and mezzanine restaurant. The design team utilized water-inspired imagery and furniture-manufacturing concepts to pay tribute to the building’s historic past within Grand Rapids. These extended-stay rooms feel more like urban apartments with exposed brick and timber and existing hardwood floors alongside every modern amenity desired by today’s travelers. 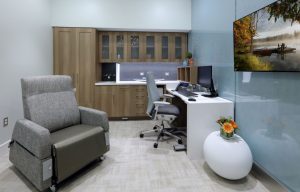 The existing building previously had infill lobby floors that connected two towers on six levels. These internal lobbies were removed at several floor levels to create the multistory interior atrium space. Originally one floor, the central entrance lobby was opened up to create a larger 2-story lobby with a grand staircase that connects to the hotel check-in and concierge. The expanded central lobby services the north and south towers for hotel guests, office users and apartment residents. The second floor of the main lobby also offers a mezzanine bar and restaurant. Two rooftop lounge spaces—one servicing hotel guests and the other a private retreat for the apartment residents—were also included in the renovation.

Although the building was in good structural condition, the adaptive reuse project presented a number of challenges related to the age and condition of the existing building. Because few improvements had been made to the building in the previous 15 years, the existing tenants were left scattered throughout, making office leasing inefficient. The sequence of the project presented another challenge. Half the existing tenants were to remain, so it was necessary to relocate them to new spaces before construction could begin on the new hotel space.

Conveniently, one of the owners of the project—Visser Brothers—also was the contractor, allowing the design and construction document processes to be completed in very close collaboration with the construction team. The production schedule was planned to allow the owner to budget and construct the spaces with minimal disruption to the tenants. The project met the owners’ schedule and completed their goal of providing upgraded leasable spaces while allowing them to maintain their existing tenants. 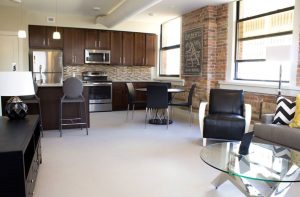 The loft-style apartment units include high-end features, such as quartz surfaces and walnut cabinetry, that contrast nicely with the original building structure.

Hotel and apartment walls and floor structures had to meet acoustical requirements of today’s building codes. Special treatments were designed by Ghafari Associates to isolate sound between apartment floors and offices. In addition, there are a couple masonry walls in the building, so the design team incorporated these as the separation walls between the office and hotel spaces where possible. The team also had the existing floor/ceiling assembly tested by ABD Engineering and Design, Grand Rapids, which determined the assembly would meet code requirements, so it was largely left intact.

Because of the building’s age and usage change, a new HVAC system was installed. Boilers with a cooling tower and a heat-pump system now provide comfort for the hotel, offices and apartments. The former mechanical room was moved from the basement to an area on the roof.

All new LED lighting has been installed in the office tower and shared lobby. A new EPDM roof and entrance canopy were incorporated. The hotel roof deck includes an outdoor café and bar. A portion of the roof is a “live roof” to improve the view from the decks. Other than cleaning and minor restoration, the exterior brick and windows remained intact. 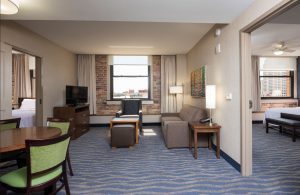 The extended-stay hotel looks more like an urban apartment building with exposed brick and timber and existing hardwood floors.

Heavy-timber floor joists that were removed to create the lobby were repurposed as large planter features within the newly created atrium space. Brick was saved and reused to create the new window openings in the atrium.

Ultimately, the major interior renovations successfully reactivated an underutilized building, offering more leasable high-end office space, a thoughtful balance between historic architectural elements and new contemporary amenities, as well as modern streamlined interiors. Together with the owners and a team of consultants, Ghafari Associates was able to successfully produce more than 20 new office-tenant spaces, the hotel, apartments and rooftop decks. The original building storefronts from the 1950s remain intact, along with the original wood plank flooring, exposed brick and a few original coal chutes. The Waters Center is again a viable hub in downtown Grand Rapids, a proud tribute to the city’s past and bright future.

Demo began in September 2014 for the first tenant relocation (Baker Holtz). The apartments opened December 2015, and the project was complete when the hotel opened in July 2016.

Kendra Achenbach is a marketing coordinator for Ghafari Associates LLC.

Six Systems Commonly Are Being Updated in Today’s Guestrooms

Be the first to comment on "Former Exhibition Building in the Furniture City Gains New Life as Offices, Apartments and Hotel Space"