Pennsylvania became an epicenter for shipbuilding, coal mining, and iron and steel fabrication soon after it was established as our nation’s second state in 1787. In fact, Bethlehem Steel, Bethlehem, Pa., began operating in 1863 and reigned as an icon of America’s industrial prominence from the late 19th to the close of the 20th century; for many years, it was our nation’s second-largest steel producer and largest shipbuilder. Nestled in the Lehigh Valley, a metropolitan area that encompasses three counties near the New Jersey border, Bethlehem Steel’s tens of thousands of employees created the steel used in many of the United States’ most famous buildings and bridges, not to mention ships that helped win World War I and II. 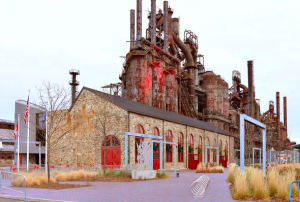 The 10,883-square-foot Bethlehem Visitor Center consists of exhibits and multimedia displays that share Bethlehem Steel’s and Lehigh Valley’s history, as well as offices for the performing-arts center and 50 public restrooms.

After Bethlehem Steel closed its doors in 1997, its blast furnaces, mills and ancillary buildings remained quietly on the 1,800-acre site, reminding Bethlehem’s citizens of their families’ storied histories in steel production. Citizens rallied for a new life for the site and its buildings, prompting the local taxing bodies to establish a 126-acre area of the industrial campus as a tax incremental financing district, which allocates future real-estate tax dollars generated on the site to be reinvested into its redevelopment.

Meanwhile, the city of Bethlehem approved construction of a Sands Casino and Resort on a portion of the 126 acres, which is close to Bethlehem’s downtown shopping district. “We did that because our community wanted to preserve as much of the Bethlehem Steel site as we could,” explains Tony Hanna, executive director of the Redevelopment Authority of the city of Bethlehem, owners and developers of several projects on the site. “Because the Sands Casino is generating a tremendous amount of real-estate tax, we are able to take 65 percent of those real-estate taxes and reinvest them into various public projects.”

Among those public projects is the transformation of much of the remainder of the 126 acres of the Bethlehem Steel site into an arts and entertainment venue that features an outdoor music pavilion, dramatically placed in front of the former blast furnaces; a newly constructed performing-arts center; and a public television station and studio. Welcoming visitors to the arts and entertainment venue is the oldest Bethlehem Steel building left standing, the former stock house, which was built in 1863 and has been transformed into the Bethlehem Visitor Center. The 10,883-squarefoot meticulously restored stock house consists of exhibits and multimedia displays that share Bethlehem Steel’s and Lehigh Valley’s history, as well as offices for the performing-arts center and 50 public restrooms.

The Bethlehem Visitor Center connects the site’s current use with its industrial past, a priority of the Redevelopment Authority. “We decided we’d take the oldest building on the site and not only rehabilitate it, but actually restore it,” Hanna says. “We spent a rather significant amount of money—$5.5 million—to do a meticulous restoration and actual recreation of what the building looked like in 1863. Restoration was the only option.” 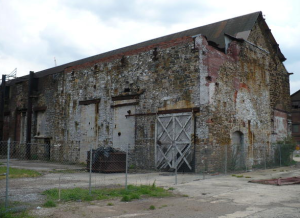 Before: It was obvious that during the stock house’s life, repairs were made in a practical sense and not necessarily by craftsmen. Photo: USA Architects & Planners

Located in the shadow of the towering blast furnaces—all of which have been maintained on the site—the stock house was originally built to store the coal, iron ore and limestone used to fuel the iron foundry’s blast furnaces. As iron gave way to steel production, the stock house became Bethlehem Steel’s Alloy & Tool Division until the division was shuttered in the 1970s. Then the stock house stored parts for blast-furnace maintenance. Despite its many uses, one thing is certain: The building was never constructed to be much more than a storage facility. Its original intent and its dilapidated state presented many challenges to the design and construction teams.

“When I first looked at the building when we took this job, I couldn’t believe we were actually going to restore it,” says Eric DeLong, AIA, project architect with USA Architects & Planners, Easton, Pa. “When Bethlehem Steel originally built this, they weren’t expecting it to be a featured building on a huge cultural site. It was just to store raw ore and haul it up to the blast furnace.”

Design for the Bethlehem Visitor Center commenced in November 2009; construction started in July 2011; and substantial completion occurred in May 2012. Interior exhibits and signage still are being finalized.