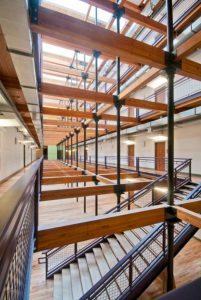 Converging the preservation and sustainability movements, Boston-based ICON Architecture Inc.’s RENEW practice is committed to optimizing inherent value in existing buildings through environmentally conscious design and culturally conscious preservation. While rooted in history, this approach looks to serve the future in developing high-performance sustainable environments. The renewal of the historic Appleton Mills, a former textile mill in Lowell, Mass., is representative of the application of this old/new comprehensive style, making the old new and relevant again.

Today, the artist live/work lofts at Appleton Mills have expanded the burgeoning artist community in Lowell, offering loft homes with broad floor plates and high ceilings scaled to encourage a variety of art formats, as well as a gallery to showcase artists’ work.

For many years, the remains of Appleton Mills stood prominently at the center of the Hamilton Canal District (HCD), a manmade island bounded by the canals that once powered former industries. (See “Creation of the Hamilton Canal District” for more information about Lowell’s history and renaissance.) Several vacant and ominous buildings lined the canals and set a negative tone for visitors to the city and its National Historical Park.

Given that there was an emerging artists community in Lowell, this mill environment seemed to offer a unique setting for an artists’ village. The design and development team toured local artist facilities and met with invested artists to assess the best program for moving the project forward. Reusing Appleton Mills, which is one building composed of several different parts connected on the upper levels, for live/work would allow the most open, flexible floor plans, revealing as much as possible of the original structure and mill character. The idea to create “maker space” also harkened back to the original building’s use as a textile mill.

When design was initiated, the structure was unsafe from years of neglect; it had not been inhabited for 20 years. A recent fire devastated the top floor, and the roof had collapsed. Deconstruction of the entire interior structural support and floor system had to be undertaken with 5-storytall steel “K-braces” temporarily installed to hold the extant masonry walls in place. The original steel and cast-iron columns and beams were numbered as they were removed, so they could be reinstalled in their same position when the interior was rebuilt. New wood planks thick enough to qualify for heavy-timber construction were imported from Canada. These planks now form the floor and ceiling of the corridors. Their rich color and texture add warmth to the interior spaces.

Work surrounding the building uncovered a number of interesting finds from the mill’s past. For example, the remains of the hydropower system that once powered the building was discovered. The turbine has been left in place and may ultimately be interpreted as an exhibit in the landscape. The water raceways that were found below grade were made of wood and still intact because of their position underwater. A safe discovered in the former Counting House had to be removed; however, the transaction windows where mill workers picked up their pay were incorporated into a new unit. 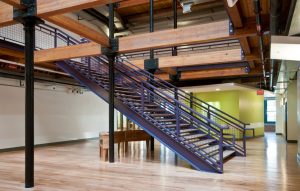 The existing inefficient, wide floor plates of the former mill building created a design challenge; even with deep units, a broad central space was left over on each floor. Rather than fill this floor area back in, the design team chose to leave it open, celebrate the structure and highlight this gathering space with broad skylights at the roof. Now known as the Atrium Gallery, the 4-story light-filled space showcases emerging artist works and offers an informal critique gallery on each floor. It also serves as a hub for artist events and gatherings, civic meetings and public events that contribute to the cultural fabric of the city.

A “Call for Artists” competition for the permanent art installation that would highlight the Atrium Gallery drew many submissions. The installed piece draws visitors’ eyes up to a floating sculpture suspended from the rafters, creating a dynamic environment that constantly changes as light moves through the space.

The patterning evokes the feeling of a moving river with subtle bends and curves to link the four levels of the atrium space. The Atrium Gallery is surrounded by additional amenity spaces, including a community lounge; social laundry; fitness center; rooftop terrace, featuring a green roof; and collaborative raw workshop space. The common laundry was designed to be a space for social interaction with tables and chairs and large windows looking out into the atrium. A phone app that signals when the machines have completed their cycle allows residents to engage with the surrounding amenity areas, as well.