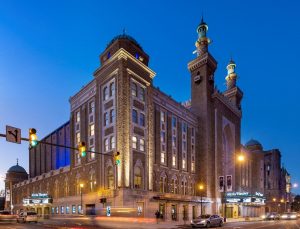 For generations of theatergoers, the 3,600-seat Altria Theater in downtown Richmond, Va., was where they first saw a Broadway road show; heard Frank Sinatra, Elvis Presley or Duke Ellington perform; and marveled at the stage sets of “The Nutcracker”. The theater was popularly called “The Mosque” through much of its history because of its distinct Moorish castle style and Moroccan details. It was the place to play and the place to be seen, becoming one of the most popular theater venues in Virginia for generations.

The building was originally designed in a Moorish Revival style by architects Marcellus Wright Sr., Charles M. Robinson and Charles Custer Robinson for the Shriners’ ACCA Temple and opened in 1927. In addition to staging performances of all genres, the massive 180,000-square-foot building hosted the Shriners’ community events, conventions and social activities. Forty-two hotel rooms; multiple event spaces; a swimming pool; billiard rooms; an ornate, Egyptian-décor ballroom in the basement; and a three-lane bowling alley were included in the original building program. However, as many Richmonders moved out of the city and into the suburbs, the Altria Theater began to lose its luster. A 2002 citywide arts master plan initiated by the city and developed by Wilson Butler Architects, Boston, envisioned a bold program to revitalize four downtown venues, including the Mosque and other cherished but aging performing arts spaces throughout the city.

Partially funded by state and federal historic tax credits, the interior and exterior renovations bring this historic theater into the 21st century while respecting the original architecture and community mission. The new Altria Theater provides space for pre- and post-performance activities in several restored “parlor rooms” and in the 16,000-square-foot Grand Ballroom.

“The Altria Theater truly is a treasure and a one-of-a-kind experience,” says Scott Wilson, AIA, director at Wilson Butler Architects. “The opportunity for us was to create a genuinely memorable patron experience and to provide new discoveries for patrons to find each time they come.”

In addition to staging performances of all genres, the massive 180,000-square-foot building hosted the Shriners’ community events, conventions and social activities.

The city of Richmond purchased the building in 1940 and, after a restoration project in 1994-95, the name was changed to the Landmark Theater. The 2002 citywide arts master plan led the way to a decade of reinvestment in arts programming, facilities and partnerships. This concerted effort by more than 15 collaborating arts and cultural groups (symphony, theater, ballet) to revitalize the performance spaces of downtown Richmond began a reawakening of not only these concert halls and theaters, but of the city district itself.

For the Landmark Theater, the overarching goals of the renovation were to improve the audience performance experience, create excitement and expand the revenue opportunities of the space. It was a challenge to integrate state and federal historic tax requirements into the issues dictated by modern building codes and 21st century patron expectations. The design team had to wrestle with the limitations placed on design changes and comply with the Secretary of the Interior’s Standards for the Treatment of Historic Properties.

The building’s 5-story façade, a landmark cherished by three generations, was meticulously refurbished. Its historic terra-cotta details, decorative tile work, and lobby fountain were authentically restored using existing plans, historical photographs, and multiple meetings and discussions with the Virginia Department of Historic Resources, Richmond. Interior light fixtures, paint, tiles, and finishes were restored based on historic photographs and research to bring these ornate features back to their original 1920s grand appearance. At other locations, rooms, such as the grand lounges and the Egyptian-styled Grand Ballroom, were restored based on research and recreation.

“To be involved in the thoughtful transformation of a significant historic and iconic treasure was equally challenging as it was rewarding,” says Pete Cameron, AIA, associate at Wilson Butler Architects. “From infusing new life into a historical marquee to integrating improved acoustics and lighting was an incredible process.”

The coloring of the Grand Tier’s recently restored mural inspired an intricately patterned, colorful carpet designed in collaboration with the team’s artist. Furnishings were inspired by their predecessors: opulent, colorful and sumptuous. Fountains and lush pools that were once a maintenance nightmare were reimagined with textured and backlit blue glass to replace water and ensure patron safety. Each room has a different furnishing color scheme or “set” in the tradition of a theatrical production.

Flooring Is a Vital Piece of Functional Fitness Equipment