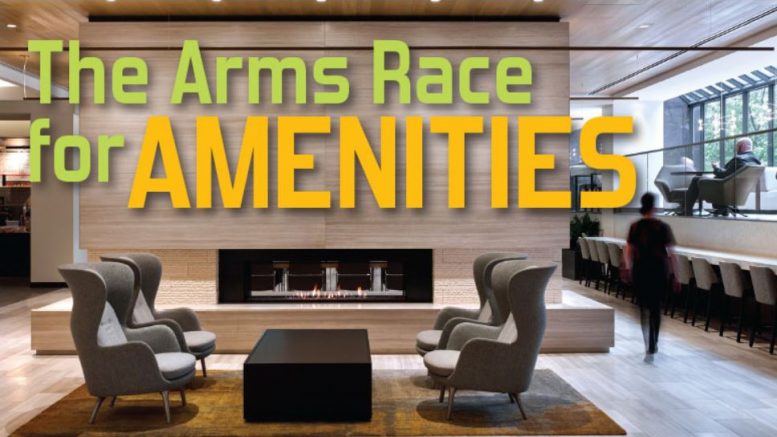 Corporate America is a war zone. As companies compete for greater market share and profits, the battle to attract and retain the best employees has never been fiercer. In fact, Gensler’s 2016 U.S. Workplace Survey revealed many companies are struggling to draw and keep good people. Increasingly more workers are stepping out of the corporate structure to work from home or other “third places,” such as coffee shops and libraries—with 40 percent of the workforce expected to become independently employed by next year. To up the ante, Apple, Google, Facebook and the like have raised the stakes in the war for talent by introducing residentially and hospitality-inspired amenities to entice the best and brightest to the workplace and, ultimately, keep them there.

“By creating environments that reduce the contrast between home and work, organizations can attract the most passionate employees to an environment where people want to do their best work,” writes Samantha Goldberg of Commercial Property Executive magazine (see “Trend Alert”, January-February 2018 issue, for our story about this movement). “Just as corporations are competing in the war for talent, office owners are striving to attract top-quality tenants by bringing hospitality-like amenities and services to their buildings.”

The result is a sort of “amenities arms race” in the commercial real-estate market, and existing building owners would be wise to evaluate their current position and strategy.

Marc Fairbrother, AIA, NCARB, vice president and office leader, CallisonRTKL Inc., Washington, D.C., describes the aforementioned changes in the workplace as a “secular shift” that calls into question the efficacy of the office as we know it. “Employees don’t have to be there, so it brings into question: What’s the future of the workplace?” he asks. “We won’t know the answer to that for another 10 to 15 years, but I bring that up to say the stand-alone office building is probably not that viable in today’s marketplace.”

Rather than lament the death of the status quo, Peter Sloan, AIA, RCID, director of interior design, HOK, Kansas City, Mo., sees tremendous opportunity in repositioning existing buildings to become more attractive to current market conditions and expectations. “The idea of repositioning or upgrading buildings—or however we want to classify taking existing assets and enhancing them—is perhaps at a premium at the moment, in my opinion,” he says. “If you take into consideration the location and the fact that there’s already an incredible investment and equity within those buildings, and by transforming them in the right way there’s a great opportunity … to take buildings that have been underperforming and think about, ‘How do we enhance and invest in them in a way that’s going to increase tenancy and, ultimately, have a different appearance within the marketplace?’.”

Case in point: Fairbrother recalls a recent client who struggled for three years to find a tenant for a 25-story, 425,000-square-foot office building in an urban setting, in spite of spending $20 million on a five level underground garage. After repositioning the building into a mixed-use facility with half the space dedicated to office and the other for residential, “they got a tenant immediately,” he recalls. Real-estate investment trust AvalonBay Communities took 200,000 square feet of residual office space in the building for its headquarters, yet “they couldn’t get anyone to be interested in a stand-alone spec office building in an urban location,” Fairbrother notes.

The anecdote is illustrative of the fact that commercial building tenants today expect to have access to retail, fitness and hospitality offerings to appeal to the next generation arriving in the workforce that tends to have rather high expectations. “It’s really become the norm,” Sloan observes. “The millennial employees and the younger employees who have grown up with what I’ll call a level of entitlement, there’s an expectation that’s already there, and the companies are having to be pretty aggressive in terms of either doing that themselves or moving to buildings offering those opportunities and amenities.”

To that end, Fairbrother notes how Amazon recently announced it is bringing its second headquarters to Arlington, Va., not only because it’s among the nation’s safest cities and boasts one of the highest percentages of college graduates, but also because it contains a high concentration of mixed-use environments. “That’s what the employees want—they want access to leisure time,” he explains. “That’s really the critical factor: giving people leisure time and convenience. Because the minute you start doing that, that’s when the project becomes more valuable.”

Sloan adds for landlords who are looking for class A tenants, offering hospitality-like amenities “is absolutely the expectation.” As a result, he says they must begin to ask themselves how much they are willing to invest in their buildings to even be considered in the marketplace.

LSI Industries Inc. Receives Gold Partner of the Year for Its Digital Signage

As the Affordable Care Act Rolls Out, the Health-care Market Is Adapting to Change out of Necessity—But That May Not Be a Bad Thing