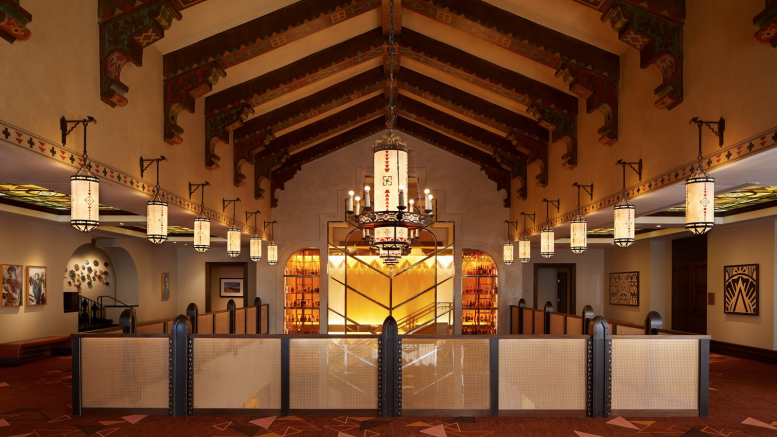 Once upon a time, The Plaza Hotel Pioneer Park made its mark on the El Paso, Texas, skyline as the ninth hotel in Conrad Hilton’s global empire and a Southwestern escape for illustrious celebrities. Now independently owned, The Plaza Hotel has returned as the living room of El Paso for off-the-beaten-path travelers and the local community alike.

In association with Paul Foster, El Paso-based In*Situ Architecture and Dallas-based ForrestPerkins as well as the National Trust for Historic Preservation and the Texas State Historic Preservation Office, design firm Cooper Carry led the historic rehabilitation and design refresh of the iconic hotel. A cross-collaboration of the firm’s Hospitality studio and The Johnson Studio at Cooper Carry, the reimagined property opened June 17, 2020, and includes 130 guest rooms, 7,600 square feet of event space, Ámbar Restaurante and Lobby Bar. La Perla, a rooftop bar overlooking the Franklin Mountains and border to Mexico, is available for private events.

Situated in the cultural epicenter of El Paso, the 1930s-era The Plaza is emblematic of the city’s prominent Pueblo Deco style. Originally designed by local architects Trost & Trost, the hotel’s design motif represents a distinct hybrid of the Art Deco style made popular in the 1920s and the naturalistic, Native American adobe architectural styles.

Partially funded by historic state tax credits and abatements, the design team worked closely with the national and state organizations to accommodate modern hotel operation and amenities while rehabilitating key aspects of the initial design, including all the historic signage, brick facade, precast deco reliefs and signature medallions, bronze on many of the storefronts and second-floor windows, interior wood trim surrounding the tower widows, the clay tile roof and Spanish-tiled pyramidal crown.

“As a hotel designer, reimagining The Plaza Hotel Pioneer Hotel for the next generation was a unique opportunity, made possible by the owner’s passion to preserve a national landmark, as well as the world-class arts community that attracts travelers to West Texas,” says Bob Neal, principal of Cooper Carry’s Hospitality Studio. “Today’s guests are seeking destinations with personality, roots in the local community and photo-worthy places to meet, and The Plaza exudes all of these, creating a one-of-a-kind destination.”

The Reimagined Lobby Bar and Restaurant

The Pueblo Deco influence continues throughout the hotel’s interiors. Upon entering the lobby, guests are greeted by the reinstated double-height atrium, previously enclosed during a mid-century renovation, as well as dramatic stained glass, skylights, wood beams, decorative stenciling and an original railing on the historic staircase connecting the first and second levels. In areas where the original terra-cotta tile flooring was missing and not able to be preserved, Cooper Carry used concrete flooring to create a layered texture, putting the building’s authentic character on display.

Pulling insight from newspaper stories and photographs published around the hotel’s first public opening, the design team reinterpreted many of the original elements with custom light fixtures, materials and color choices. A palette of rich walnut wood, velvet and mohair fabrics, warm brass metals and hand-tooled leather create a social atmosphere in the atrium and adjacent 7,500-square-foot Ámbar Restaurante and Lobby Bar.

Rising 40-feet high and displaying one of Texas’ largest tequila collections behind a sheath of amber glass and polished stainless steel, the restaurant’s back bar is the hotel’s pièce de résistance. A new, contemporary-style staircase is partially concealed behind the bar and amber glass, providing server access to the wall of tequila, as well as secretly connecting the main dining room and exposed theater kitchen down to a cellar-like private dining space located in the former trunk and boiler rooms. Check-in activity is located off to the side of the bar and plays a secondary role to the hotel’s food-and-beverage experience.

“Conrad Hilton described the hotel’s debut party as the kind of night where everybody called each other by their first name, and his words informed how we approached the convivial yet contemporary design,” says Anna McGrady Miller, director of interior design at The Johnson Studio at Cooper Carry. “Partnering with the firm’s Hospitality Studio from the early stages of the design allowed us to create an integrated and seamless guest experience that flows from arrival throughout the building and to the roof.”

On the 17th floor, The Johnson Studio also spearheaded the design of La Perla, a 5,000-square-foot rooftop bar and restaurant located in the former penthouse suite where actress Elizabeth Taylor lived during her marriage to Nicky Hilton.

Harkening back to classic, 20th-century luxury, the design team infused sophistication with alluring accents, such as white marble, bright florals and mirror-polished steel. With impressive views of El Paso and beyond, the outdoor patio offers tiered-seating and built-in garden planters to create intimate seating areas.

“Through the historic rehabilitation and reinvigorated guest spaces, Cooper Carry accomplished our goal of telling the history of The Plaza through the design,” notes Paul Foster, who owns The Plaza Hotel Pioneer Park. “The hotel has held a special place in the hearts of El Pasoans for almost 90 years, and we are thrilled to welcome a new generation to join the hotel’s next chapter.”