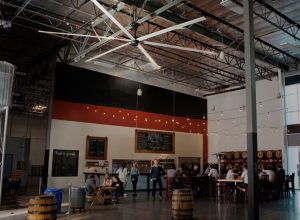 Ritual Brewing Co. is located in a warehouse in Redlands, Calif. The atmosphere is ideal for enjoying a cold one with your friends. Unfortunately, since Ritual is in a warehouse with no air circulation, summers were brutal before they discovered MacroAir fans.

According to Tim Swift, an brewer at Ritual, it could get up to 100 degrees inside with no possibility of it cooling down over night. The staff tried floor fans, but it was not helping.

Owen Williams, who is the co-founder, knows that since it is a warehouse there is little to no air circulation whatsoever. Testing drones inside the space would be an impossible task.

Owen says, “For 23,700-square-feet, you need a fan. You need something that is going to move the air and create that cooling effect. That was what we needed. That was a decision.”

The fan choice for Ritual was MacroAir. Both Tim and Owen noticed a difference right after its installation. It was finally cool, and moods had improved knowing they would not have to go through another hot summer. Now employees work in a cool environment, and customers are able to relax and not worry about the heat while enjoying their selection of beers.

“If you’re thinking about a big fan, it’s got to be MacroAir. I wouldn’t go anywhere else,” states Owen Williams.