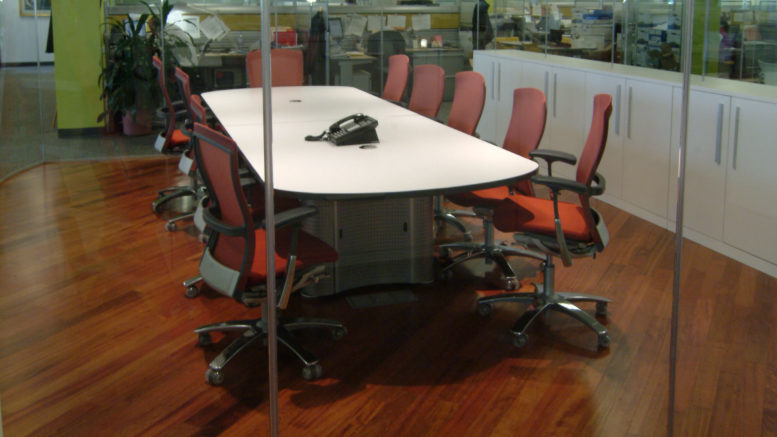 When a New Jersey company transformed more than 10,000 square feet of old-style office space to conserve energy and improve productivity, one key was to retrofit the underfloor duct system to support power, data and communications in open spaces and this glassed-in conference room. Duct activations can be seen in the foreground and under the conference table.

With the slow-down in new commercial office construction, renovation and retrofit of older facilities is an attractive option for owner-occupied and leased space. Many of these buildings contain infloor-duct systems within their concrete floors, but building owners and facility managers may not be aware of the systems or may assume the ducts are obsolete or inadequate for today’s needs. In fact, infloor ducts—even those that predate World War II—are still viable wire- and cable-management systems that represent a cost-effective pathway to retrofit or upgrade power, data, communications and audio/video.

An infloor-duct system consists of a series of distribution ducts, feeder ducts and, in some cases, junction boxes that run from the electrical closet and communications room under the floor of workspaces. These systems are encased in concrete and are not visible. What can be seen, however, are activations that lead from openings in the ducts, known as presets, to the surface of the floor where they house electrical receptacles and connections for telephone and other low-voltage systems.

Because infloor ducts are straight, the activations will appear in a line, though not necessarily perpendicular or parallel to walls. The activations may be flush with the floor, but in many older buildings they are raised above the floor. These raised activations are often called “tombstones” and “doghouses” after their distinctive shapes. If a system has a junction box, a square or circular cover plate will also be visible, though it may have a carpet insert, making it less obvious. 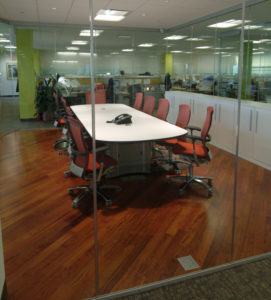 When a New Jersey company transformed more than 10,000 square feet of old-style office space to conserve energy and improve productivity, one key was to retrofit the underfloor duct system to support power, data and communications in open spaces and this glassed-in conference room. Duct activations can be seen in the foreground and under the conference table.

If a building has an existing infloor-duct system, the chances are good that it can continue to be used in its present form or with some cost-effective modifications.

Although infloor ducts are very durable, many older systems may be limited by the volume of wires and cables within them. For example, it is not unusual to find discontinued telephone wiring that was never removed when newer cabling was installed. Removing unneeded wiring by pulling it out of the duct frees up space for new cabling. If the retrofit project includes a complete electrical and data upgrade, all older wires and cables can be easily removed.

While the ducts themselves will remain unchanged, a system renovation should include replacing outdated “tombstones” and “doghouses” with new flush activations. These components, which are available in a variety of finishes, provide power and connections for voice, data and audio/video.

The spacing of activations along the ducts that was right for a building at the time of its construction may be inadequate for today’s open plan spaces and densely served workstations. When it comes to adding new activations, an existing duct system is remarkably flexible because additional fittings can be added easily to existing ducts.

These components, known as aftersets, are installed by drilling the existing floor, making a new opening in the duct and installing the afterset with new activations and cover assemblies, allowing end users access to outlets, data jacks and A/V connectivity wherever such services are needed. Seek aftersets designed to work with any legacy duct system.

Installed duct systems can often be given additional cable capacity by using a trench feeder. These trench feeders are installed into new or existing power and data closets and can be used as high-capacity feeders for older previously installed infloor ducts.

Resurrecting an existing infloor system is a great way to provide flexibility to an office area, allowing the owner or tenant easy adds, moves and changes to an office or area requiring significant access to power, data and A/V. A usable infloor system is also more attractive to potential tenants and may be the deciding factor in leasing an office space because it allows tenants to place work stations and furniture in open areas or office spaces without concerns about access to services and the worry of having to engage in significant renovations.

Hanh Le is a product marketing manager, and Jim Humphries is a senior engineered products consultant for Legrand, North America.