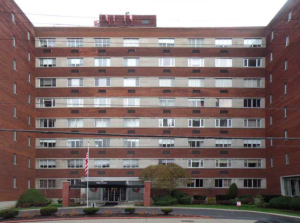 Pressured by rising costs, the property manager—Arnheim & Neely—was faced with raising monthly fees to offset the property’s $20,000 per month electric bill or find a way to allocate and bill each owner’s electrical usage to recover a significant percentage of the facility’s operational overhead. Seeking to work with the owners, some of whom had been in the building up to 30 years, Park Plaza Condominium Associates chose the latter option.

A&N estimated running additional power company metering to each of the building’s more than 120 units would be five or six times costlier than simply submetering each apartment, including all residential units, to isolate each owner’s electrical usage (kWh) behind the main utility meter.

Submetering turned out to be the ideal solution for this application and a great way to avoid the inherent unfairness of traditional ratio-based fees commonly used in the industry. Based on a simple cost-per-square-foot formula, ratio-based structures favor high-consumption users by unfairly saddling low-use consumers with shared costs beyond their control or ability to manage. Submeters prevent such inequities and eliminate disputes by providing proof of actual energy usage.

At this point, the electrical contracting firm, Scalise Industries, Lawrence, Pa., was called. As service manager of the electrical division, Phil Reiss was given the job of managing the project, finding a vendor and supervising the submetering installation. Based on prior experience with the E-Mon D-Mon submeters, Reiss worked out the details with his local distributor, Tony Rinehart of Scott Electric, and the local E-Mon rep, Jack Group.

Once the job got underway, the team of manufacturer’s rep, distributor and project manager functioned like a well-oiled machine. “Scott Electric didn’t have an order that size in stock,” Reiss explains. “However, the factory got us all the equipment in a very timely fashion. E-Mon’s tech support and Mr. Jack Group were a huge help.”

Submetering the 12 commercial spaces on the ground floor proved less challenging than metering the residential floors above. “The entire building had finished drywall ceilings with limited access for cabling,” says project manager Reiss, who explained that the 200A split-core current sensors were installed in an existing junction box in the hallway just outside each apartment. “We were able to pull cables from all the current sensors down to the MMUs. All the new cabling came through the corridors, then down the electrical riser closet to the basement.” 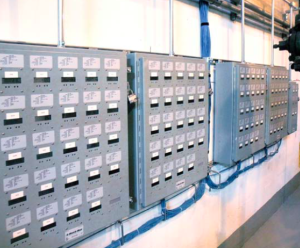 The hinged construction of the low-voltage (0-2V) output split-core current sensors allowed the electricians to install them non-invasively around the electrical feeds being monitored, thus eliminating the need to shut down the load and resulting in a safer, faster install.

In the basement, an Ethernet cable was run a few feet from the MMUs to the building’s engineering office where a desktop PC running E-Mon Energy software is used to analyze the meter data and output monthly owner billing statements.

The entire installation took only 35 working days for Scalise foreman Pat Kelly, who did the layout and most of the installations, assisted by Mike Petrosky. Since it went operational, Arnheim & Neely calculates the system’s $113,000 installed cost paid for itself in only seven months—based on $16,000 per month in electrical costs that were recovered as a direct result of submetering the property. Park Plaza has no need to expand its existing system right now, but should the owners decide to factor common-area electrical usage—another $4,000 per month—into the mix, it would be an easy matter to retrofit additional meters to recover those costs, as well.

“The property manager is very satisfied with the entire system,” Reiss notes. “They especially like how the software can collect all the data and produce a monthly statement to send to the building’s residents.”

Thanks to the property manager’s appreciation of Park Plaza’s valued residents, a system was installed that forestalled the necessity of raising monthly maintenance costs by providing a means to fairly and accurately assess individual electrical usage. Allocating actual costs to the using parties allowed these farsighted property owners to “kill two birds with one stone” by improving the facility bottom line while also increasing owner satisfaction through more fair and equitable billing practices.