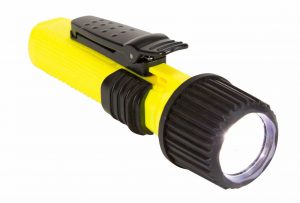 The LED flashlight is a portable lighting solution for hazardous locations.

Larson Electronics LLC has announced the release of a LED flashlight to be added to its expanding catalog of products. This LED flashlight (EXP-LED-401-MSHA) features an MSHA rating for mining activities and has been designed as a portable lighting solution for hazardous environments.

This LED flashlight is MSHA rated (tested for intrinsic safety in environments with methane-air mixtures only) and supports three beam settings: high, low and flash. In low beam mode, the unit emits 62 lumens of white light that reaches 272-feet with a runtime of 13 hours. In high beam mode, the flashlight emits 157 lumens of white light and reaches 383-feet with a runtime of 6.15 hours. Operators may use a fastener to lock the switch to ensure that the flashlight remains off in hazardous locations. Also included are several safety features. An air-free heat sink design helps to improve heat dissipation during operation, while also reducing the possibility of malfunction from overheating. A valve design prevents the buildup of hydrogen gas. This unit is ATEX/IECEx approved and IP68 waterproof with a T4 temperature code. Applications for this LED light include, but are not limited to, mining operations; hazardous locations; chemical processing plants; oil and gas; construction; fire fighting; task lighting; emergency lighting and more.