Relume was approached to provide a lighting solution for Fenlon Square Parking Facility at the Easton Town Center, an upscale shopping destination in Columbus, Ohio. The project was awarded on the overall value of the fixtures and performance based on uniformity, low glare, ease of installation and energy consumption. Relume was also able to provide a 10 year warranty to help reduce life cycle cost for Easton.

Five hundred forty Relume parkVUE 50HB fixtures were installed. They provide a 60 percent reduction in energy use over MH lighting and more than a 100,000-hour lifespan of new LED light engines versus 20,000-30,000 hour lifespan of traditional lamps. Their prismatic lens offers glare reduction while the lamps provide increased visibility for drivers. 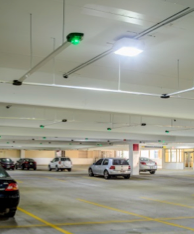 The parkVUE 50HB was tested alongside other fixtures and was chosen for its superior glare reduction and uniformity of light with contribution to the floor and ceiling eliminating the cave effect.

One of the biggest problems with a parking garage lighting installation is the glare that comes with LED fixtures. The parkVUE 50HB was tested alongside other fixtures and was chosen for its superior glare reduction, uniformity of light with contribution to the floor and ceiling eliminating the cave effect, and its ease of installation, making it the clear choice for this project. The fixtures exceeded all expectations, and the owner’s team was very excited.

Because Easton had already purchased Relume for a previous relight project, its representatives believed that the parkVUE fixtures were superior to the original spec for the new garage. The local architect was familiar with Relume and the town center’s operations team wanted to design using the parkVue fixture. The parking garage consultant desired a competing product instead. Using Easton’s existing garages as a sample platform, as well as lighting calculations and energy analysis, the 50HB was selected for the new installation. 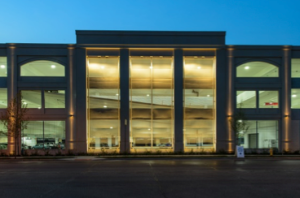 The 50HB fixtures were so easy to install and bright the contractor used them as their construction lighting throughout the entire project.

“The fixtures have done an amazing job. The 50HB fixtures were so easy to install and bright the contractor used them as their construction lighting throughout the entire project. What is wrong with a parking garage going from a dimly lit space to a brightly lit, safe place? The parkVUE 50HB does just that,” says Kurt Beres of M+A Architects.

Using Relume LED fixtures results in an overall savings of 60 percent annually, estimated at more than $50,000. Utilizing the savings in energy costs and additional estimated maintenance savings the project will have a projected simple payback of three years. 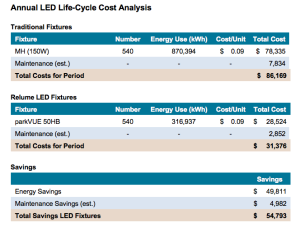 Retrofit Existing Can Lights with LED